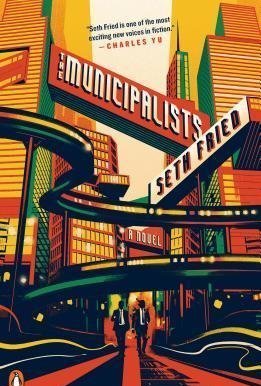 In Metropolis, the gleaming city of tomorrow, the dream of the great American city has been achieved. But all that is about to change, unless a neurotic, rule-following bureaucrat and an irreverent, freewheeling artificial intelligence can save the city from a mysterious terrorist plot that threatens its very existence.

Henry Thompson has dedicated his life to improving America's infrastructure as a proud employee of the United States Municipal Survey. So when the agency comes under attack, he dutifully accepts his unexpected mission to visit Metropolis looking for answers. But his plans to investigate quietly, quickly, and carefully are interrupted by his new partner: a day-drinking know-it-all named OWEN, who also turns out to be the projected embodiment of the agency's supercomputer. Soon, Henry and OWEN are fighting to save not only their own lives and those of the city's millions of inhabitants, but also the soul of Metropolis. The Municipalists is a thrilling, funny, and touching adventure story, a tour-de-force of imagination that trenchantly explores our relationships to the cities around us and the technologies guiding us into the future.

Main Image Courtesy: penguin.com.
Images And Data Courtesy Of: Penguin Books.
This content (including text, images, videos and other media) is published and used in accordance with Fair Use.