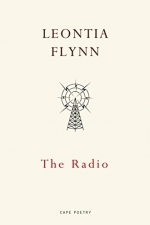 In her fourth collection, Leontia Flynn rehearses and resolves the concerns and forms of previous books, beginning with a sequence written in the aftermath of her father’s death from Alzheimer’s disease and during the care of her daughter in infancy. Moving on to explore the constructed nature of childhood, via a long poem imagining her mother’s experiences in Northern Ireland during the Troubles, and in an elegy for Seamus Heaney, the poems also seek to contrast the isolation and privacy of an experience of family life with increasingly pervasive and relentless digital technologies.

Drawing on a range of other voices and literary exemplars, including a tradition of verse drama and dialogues, and particularly Plath’s ‘Three Women’, The Radio sees writing poems as a communication that begins with an act of interior listening, for sounds and forms, and to personal sources of meaning.

The Radio explores the pressure the interior life faces from both the usual quotidian struggles and the new stridency and quick-fire certainties of virtual communication. Showing her superb mastery of form, Leontia Flynn’s poems are fragile, funny, observant and engaging – reminding us, once again, of her originality and importance.