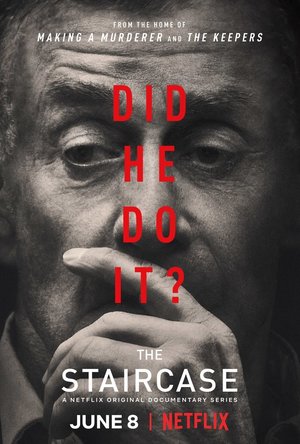 The Staircase is a 2004 French television miniseries by Jean-Xavier de Lestrade documenting the trial of Michael Peterson, accused of murdering his wife, Kathleen Peterson.

Following from de Lestrade's Oscar-winning Murder on a Sunday Morning, filming began soon after Peterson's indictment. Camera crews were given access to the accused's extended family, the defense attorneys, and to the courtroom.

An abbreviated version was broadcast as special two-hour presentation of American news show Primetime Thursday on July 22, 2004. The miniseries was completed in September, and premiered in October on Canal+, from January 10-14, 2005 on BBC Four.

It was later picked up by Netflix to be released as three new episodes of the miniseries, together with the previous ten episodes on June 8, 2018. The first of the new episodes premiered April 28, 2018 at the Tribeca Film Festival.

Main Image Courtesy: http://vodzilla.co/blog/vod-news/netflix-brings-back-the-staircase-with-all-new-episodes/.
Images And Data Courtesy Of: Netflix.
This content (including text, images, videos and other media) is published and used in accordance with Fair Use.