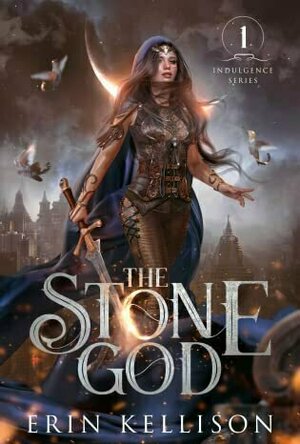 Terah Crane knows not to tempt the gods. A happy life—or at least an uncomplicated one—involves no gods at all. And since her loving grandfather bought her an Indulgence that exempts her from their service, she can focus on her other problems—the fact that her recent divorce has left her broke, unemployed, and reeling.

Seeking a fresh start, Terah packs everything she owns into her beat-up car and moves to her family’s empty country cottage—never mind that deadly firedrakes occasionally wander into the garden. When an unlikely flood carries a cracked pillar of stone from a nearby shrine right to Terah’s doorstep, it seems the gods demand her service after all.

The man trapped inside the monolith is still alive, and Terah’s reluctant task is to resurrect him, his godkiller of a sword—and his fury for vengeance.

The gods’ awesome powers are matched only by their careless, capricious whims—and vulnerable mortals are often the ones to suffer and die. Now, the gods are watching Terah, making her a pawn in their savage game. Her survival depends upon navigating a new world of peril and treachery, taking up a weapon, and making a fateful move of her own…

Main Image Courtesy: Amazon.
Images And Data Courtesy Of: Fire Flower Publishing, LLC.
This content (including text, images, videos and other media) is published and used in accordance with Fair Use.