The Strong Within Us (The Olason Chronicles #2) 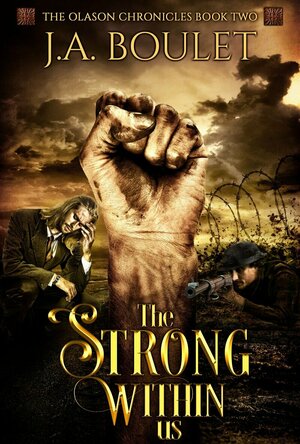 A struggle. A war. The past. Would you recover?

Nathan Olason picks up the pieces of his life in 1893 and becomes a devoted father and grandfather. Except something from his past is holding him back.

His grandson, Mike grows up in a loving family with Nath almost raising him as his own. Mike develops a passion for hunting and guns, while his family supports him with trepid hearts as WWI looms.

Nath feels helpless to stop this dangerous chain of events, as Mike announces that he is joining the Great War. Armed and deadly, Mike hones his marksmanship skills to a perfection not seen in any other soldier. He is taken on a wild ride of following his passions, courage and gruesome fighting, arriving at Vimy Ridge, France for the fight of his life.

Nath fearing the worst, flees to a place that he thought was his salvation; an old weathered cottage that holds the key to his future.

Main Image Courtesy: Amazon.
Images And Data Courtesy Of: J. A. Boulet.
This content (including text, images, videos and other media) is published and used in accordance with Fair Use.