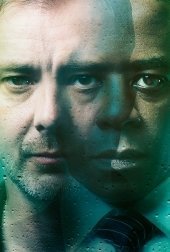 Adrian Lester and John Simm are set to star in brand new three part drama Trauma, written by Mike Bartlett.
The three-part psychological thriller centres on the lives of two fathers, Dan and Jon, whose lives collide when Dan's 15 year-old son Alex is stabbed and tragically dies in the trauma department attended by high-achieving consultant Allerton.
Devastated, heartbroken and pushed to the edge, Dan believes Jon is responsible for Alex's death. As he strives for justice, Dan begins to unpick the very fabric of Jon's life as his own unravels in the wake of Alex's killing.
Trauma is an intricate, fast-paced thriller that questions what makes a man good and explores what happens when the very institutions established to protect us and those who represent them, let us down.
Trauma is produced by Tall Story Pictures, the ITV Studios label founded in 2016 by Creative Director Francis Hopkinson & Executive Producer Catherine Oldfield. Francis Hopkinson will executive produce the new series alongside Mike Bartlett. This thrilling new drama has been commissioned for ITV by Head of Drama, Polly Hill. ITV Studios GE is responsible for international distribution.
The series begins filming in June 2017 in and around London. Watch this space for more information, this isn't one to miss....

Main Image Courtesy: ITV.
Background Image Courtesy: Francis Hopkinson.
Images And Data Courtesy Of: ITV.
This content (including text, images, videos and other media) is published and used in accordance with Fair Use.