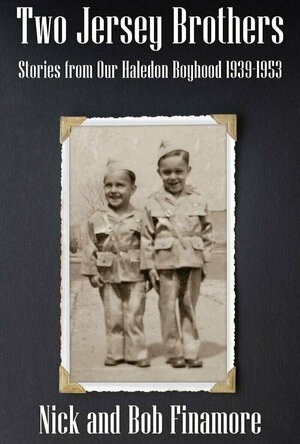 Two Jersey Brothers recounts the boyhoods of brothers Nick and Bob Finamore in the small, quiet, one-square-mile town of Haledon, New Jersey during the Depression and World War II eras. Their grandparents had emigrated from Fraine and Caserta, Italy, and, like most of their close family members, worked in the mills of neighboring Paterson, the "Silk City." In this vivid memoir they recall the colorful Haledon customers they served in their family's vintage Belmont Diner, and delve into the values of respect, discipline, and hard work they learned from their family.

They explain in graphic detail their upbringing in their Italian household that made ends meet because their parents worked hard — not because they had a lot of money.

Nick Finamore who lives in Annandale, NJ said the writing process was a joint effort. The memories that endure are shared with his brother, he said.

“We grew up without a lot, but we still managed to have fun times, said Finamore”. Those fun times included their boyhood encounters with many famous sports and entertainer names, including baseball's "Joltin'" Joe DiMaggio and "The Sultan of Swat" Babe Ruth; champion middleweight boxer Vince Martinez; NFL Los Angeles Rams head football coach Ray Malavasi and Paterson’s own Lou Costello.

But, the family also struggled with much harder times. Their vintage diner was overrun by a flood in 1945 and they were put out of business for six months. “We never met our maternal grandmother”, they said. She died during the Spanish flu pandemic of 1918.

They take you on a stroll up and down Haledon’s street of commerce.

They picked up slang and dirty jokes at the local barbershops, and they were mesmerized by a player piano at a tavern filled with thick cigarette smoke where their father mingled with close friends.

They observed the processing of a fresh hen at a poultry store. As they entered, "The sound was a very loud cacophony of squawks from white-feathered chickens sitting in cages, waiting to be slaughtered," the brothers wrote. After the hen was chosen, it was taken into a back room where a cleaver chopped down cutting off its head”. We accepted the way chickens were killed without horror. To us, it was a way of life, what needed to be done."

The most infamous event in Haledon’s history was the 1913 strike by silk mill laborers who demanded eight-hour shifts; better working conditions; and reduction of child labor at their plants in neighboring Paterson. The Botto House Museum is dedicated to that movement, which lasted for nearly six months, and it is now a national landmark because of it.

In 1944, their father opened the Belmont Diner on Belmont Avenue — a business that supported the family for 11 years. The brothers worked as short-order cooks and they often performed menial chores peeling 100 pounds of Idaho potatoes at one sitting; washing floors; and filling salt and pepper shakers.

They describe their interactions with the colorful characters that were customers of the diner. There was the plumber, the artistic painter, the referee, the body shop man, oilman, and Dugan’s truck delivery man.