We Shall Not All Sleep 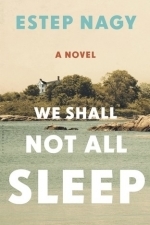 Seven Island has two houses. One for Hillsingers and one for Quicks.

1964. The Hillsingers and the Quicks have shared the small Maine island of Seven for generations. But though technically family--Jim Hillsinger and Billy Quick married Park Avenue sisters Lila and Hannah Blackwell--they do not mix. Now, on the anniversary of Hannah's death, Lila feels grief pulling her toward Billy. And Jim, a spy recently ousted from the CIA on suspicion of treason, decides to carry out the threat his wife has explicitly forbidden: to banish their youngest son, the twelve-year-old Catta, to the neighboring island of Baffin for twenty-four hours in an attempt to make a man out of him.

With their elders preoccupied, the Hillsinger and Quick children run wild, playing violent games led by Catta's sadistic older brother James. The island manager Cyrus and the servants tend to the families while preparing for the Migration, a yearly farming ritual that means one thing to their employers, and something very different to them.

Set during three summer days, Estep Nagy's debut novel moves among the communities of Seven as longstanding tensions become tactical face-offs in which everything is fair game for ammunition. Vividly capturing the rift between the cold warriors of Jim's generation and the rebellious seekers of Catta's, We Shall Not All Sleep is a richly told story of American class, family, and manipulation--a compelling portrait of a unique and privileged WASP stronghold on the brink of dissolution.