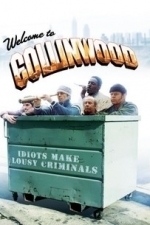 Welcome to Collinwood is a 2002 American caper comedy film written and directed by Anthony and Joe Russo and starring William H. Macy, Isaiah Washington, Sam Rockwell, Michael Jeter, Luis Guzmán, Patricia Clarkson, Andrew Davoli, George Clooney, Jennifer Esposito, and Gabrielle Union. The screenplay concerns a group of small-time thieves and misfits from the Collinwood neighborhood of Cleveland, who attempt to carry out a major theft from a jeweller's apartment safe. It is a remake of the Oscar-nominated 1958 Italian film I soliti ignoti by Mario Monicelli. It is the final film featuring Michael Jeter to be released during his lifetime.