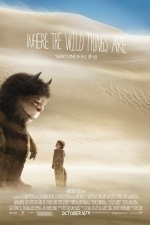 Add New Video
Edit
Where the Wild Things Are (2009)

An imaginative young boy runs away from home and sails to an island filled with creatures who accept him as their king.