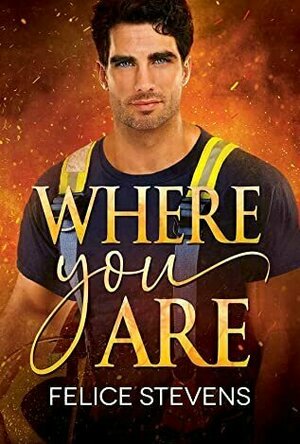 Add New Image or Add New Video
Edit
Where You Are

Former model and B-list actor (B meaning really bad) Isaac Seidel is now a NYC firefighter on special assignment in the one-horse town of Serenity, Pa. But all work and no play makes Isaac a dull boy, and when he hooks up with the most explosive one-night stand he’s ever had, it looks like country life might not be so boring after all.

Especially when the guy he thought he’d never see again turns out to be one of the volunteer firefighters he’s expected to train.

Levi Everett is a master at pleasing everyone—except himself. He’s spent his whole life hiding who he is and what he wants. It’s a lot more complicated now that he’s going to be seeing gorgeous Isaac Seidel every day. How is he supposed to pretend he’s straight when he and Isaac can’t keep their hands off each other?

Isaac has made it clear he’s only interested in friends with benefits, so when he returns home to NYC, Levi knows he’s gone forever.

Trust doesn’t come easily to Isaac—he’s been hurt and used before. But Isaac is unable to forget the man he left behind, and in a shocking move, he makes Levi an offer that could change their lives forever. Now it’s up to Levi to put himself first, risking the love of his family, to go after his dreams—dreams that were unimaginable before Isaac but are now within his reach.

Because love is wherever Isaac is, and it’s the only place Levi wants to be.

Where You Are is a sweet and steamy, age-gap MM romance featuring two smoking hot firefighters who can't seem to keep their hands off each other or their clothes on whenever they're together. It's filled with found family, first time love, a swoony happily ever after, a well-meaning but nosy mother, and plenty of good old country fried chicken.