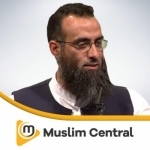 Shaykh Yaser Birjas is the Head of our Islamic Law and Theory Department. Often described as the fatherly figure by students, Shaykh Yaser exudes a calm, gentle and caring demeanour that welcomes students to ask questions with awe and respect.

Shaykh Yaser started his career in Electronic Engineering in the UAE, then in Madinah where he graduated as class Valedictorian with the highest honours from The Islamic University of Madinah’s College of Shariah (Fiqh and Usool) in 1996. He learned from various highly respected scholars such as Sheikh Ash-Shanqitee and Sheikh Al-Uthaimeen (rahimahu Allah).

In 1997, he went to work as a relief program aide to rebuild the war-torn Bosnia. In 2000, he immigrated to the U.S. where he served as an Imam at The Islamic Center in El Paso, Texas and a director of English programs in Da'wah and outreach for the Orland Park Prayer Center.

His specialty in the subject of marriage and relations made him a highly sought marriage counsellor for the Muslim community.

Images And Data Courtesy Of: Muslim Central.
This content (including text, images, videos and other media) is published and used in accordance with Fair Use.