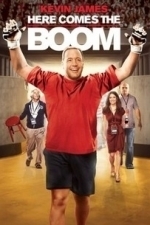 (9 Ratings)
Movie Rating Watch
In Here Comes the Boom, Kevin James takes on an all-too-familiar role, once again capitalizing on his fame as a fat funnyman. This new comedy succeeds at being heartwarming and entertaining, but not much else.

The film starts out by introducing our hero, Scott Voss (James), as a former high school wrestler who settled into a career as a high school Biology teacher. It’s clear he was once a highly motivated, recognized, and celebrated teacher, based on the awards he received, and the way he talks about the old days.

As the story unfolds, we find out the music teacher, Marty Streb (played by Henry Winkler), is in danger of losing his job. There are financial cutbacks at the school, and of course the music department is the first to go.

In an effort to gather the funds needed to save his mentor, Voss decides to get into UFC-style cage fighting, because even the losers get paid ten grand! The story continues in a very predictable and formulaic fashion. From the sexy and supportive single nurse (played by Salma Hayek), to the hard-assed principle (Greg Germann), the movie is filled with archetypal roles played by recognizable actors.

Here Comes the Boom is done well enough to get a good laugh out of you, and it has a few heartwarming moments, but don’t expect anything special. The cinematography is done well. The dialog (co-written by Kevin James) is clever enough to generate a few chuckles, but it won’t inspire awe.

The threat of music and art programs being cut from a school’s curriculum over budget concerns is a familiar issue across the country. This movie comes at a good time, benefiting from the debate currently happening in so many places.

I would watch anything with Henry Winkler in it, as I have a love-affair-from-afar with that man, and he definitely adds to the ensemble. However, the film smacks of UFC product placement. I suspect many of you will reach the same conclusion I did: that the UFC was clearly bankrolling this in some fashion. Even Joe Rogan makes a noteworthy appearance.

The film is not without its positive aspects. I was impressed at how well the humor and drama blended together. All the right things in all the right places. Here Comes the Boom is a good movie for a few chuckles, and for briefly melting a some of the ice surrounding your bitter, frozen heart. 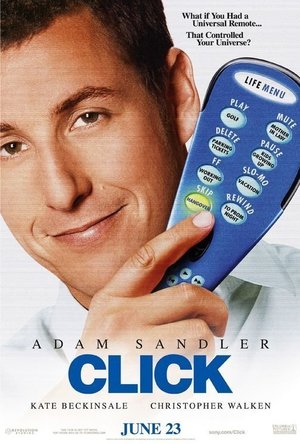 (17 Ratings)
Movie Rating
Michael Newman (Adam Sandler) is a man in crisis. As a caring a devoted father and husband, Michael is at the end of his rope as his life has become a non-stop series of projects and endless deadlines as he attempts to become a partner in his architecture firm.

His boss, Ammer (David Hasselhoff) is constantly piling work on top of Michael’s already full plate, and promises a pending partnership which only drives Michael even harder at the expense of quality time for himself and his family.

With events such as camping trips, 4th of July family outings and his swim meets being lost to his increasing workload, Michael is in need of help as even his loving wife Donna (Kate Beckinsale), is becoming frustrated with his lack of time for his family and the fact that his family has become a distant second fiddle to his job.

When his frustration point gets the best of him, Michael decides to take a drive one night and locate a universal remote in an effort to clear up the clutter of remotes that inhabit his own.

With only a Bed Bath and Beyond open, Michael finds himself in a remote room of the store where a sympathetic employee named Morty (Christopher Walken), says he has the answer to Michaels situation, a special universal remote that is his free of charge.

Michael is skeptical but when Morty assures him that it is an advanced prototype and that sometimes a good guy need breaks in life, he sets home with the remote.

Eventually Michael realizes that the remote has the power to speed up, freeze, and access various moments of his life. Suddenly menial tasks, work, and other events can be avoided simply by forwarding past those points.

As Michael works with the remote, he is visited from time to time by Morty who shows him features such as a DVD like menu where Michael can look back at everything from past girlfriends to his conception and birth.

After a setback on his career path, Michael decides to fast forward to his promotion and is shocked to discover that not only has more time passed than he expected, but that his relationships at home have been strained in the process.

If this is not enough trouble for Michael, the remote starts to take on a mind of its own, and soon forwards him in time without his approval, forcing Michael to face the changes and repercussions of a life out of control.

Click is easily one of Sandler’s best films since “The Wedding Singer” and “Fifty First Dates”, as it blends the typical Sandler humor with moments of great candor and tenderness.

The supporting work of Walken and Beckinsale is enhanced by the presence of Henry Winkler ads to the enjoyment of the film.

Frank Coraci who previously directed Sandler in (The Wedding Singer), and (The Waterboy), is not afraid to force Sandler to stretch beyond the familiar comedic routines for which he has been known and make him address more serious subject matter.

While some fans may find the blend of comedy and a more mature subject matter difficult to accept, Click is a novel comedy that is filled with laughs and yet takes the time to address important topics without ever being heavy handed.

Some may want to take issues with the crude humor, and raise issues about the remote and why certain things were done or not done. To do this would be in my opinion would be missing the point of the film which is to remind us, that no matter what, take the time out for those that are important in your life.
Kudos 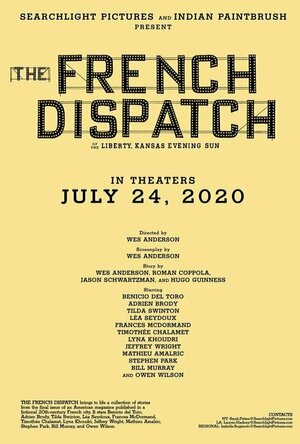 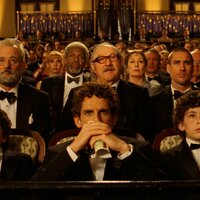 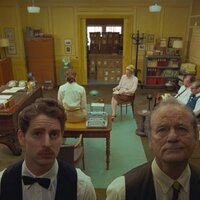 Weak Stories Can't Support the STUNNING Visuals
Filmmaker Wes Anderson is an acquired taste. He is one of the most visually stunning filmmakers working today, but his films are often time difficult to grasp and can get lost in their own weirdness.

Such is the case with his latest effort THE FRENCH DISPATCH. It is a visually STUNNING film that you can turn the sound off and just drink in the images depicted on screen with your eyes - but the story these pictures tell was, unfortunately, not all that compelling.

Starring Bill Murray, Tilda Swinton, Frances McDormand, Jeffrey Wright and a whole bundle of known stars, THE FRENCH DISPATCH tells the story of a Sunday Newspaper insert called THE FRENCH DISPATCH (think PARADE MAGAZINE). The quirk of the FRENCH DISPATCH is that this insert in the Liberty, Kansas paper in the 1930’s(or so) focuses solely on the goings-on of the French town of Enui. Stories told in the flavor of the New Yorker.

So…this setup is just, really, an excuse to tell 3 different short stories and tie them together with an overarching theme - getting the French Dispatch ready to publish. A good enough excuse for a movie - provided that the 3 stories being told are interesting enough - which they are not (and therein lies the issue with this film).

Bill Murray is a congenial enough host of this party as the Editor of The French Dispatch. His character is the “through line” of this film and if you are going to anchor an anthology film with a character/actor, then Bill Murray is a pretty good anchor.

The first story, telling of a life-imprisoned person (Benicio Del Toro) who finds a muse (Lea Seydoux) and becomes a world famous artist, thanks to the efforts of his patron (Adrian Brody) is the best of the bunch. This story is written/narrated by a character played by Tilda Swinton and it is her performance that is the highlight of the film for me. Because of this narration - and because this is the best written/most interesting and best acted of the 3 stories (by Del Toro, Seydoux and Brody), I was excited as to where this film was going to go from here.

Unfortunately, that direction was down.

The 3rd story - narrated by a character played by Jeffrey Wright about a Police Commissioner’s son who is kidnapped is absurb - and almost succeeds when Anderson decides to animate the car chase - but ultimately isn’t quite as good as the first piece.

And then there is the middle part that stars Timothee Chalamet as a student that starts a rebellion. This part is written/narrated by a character played by Frances McDormand and while these 2 are “game” for what is given to them, the story is not compelling and, to be honest, a bit boring. This middle story (the longest of the 3 tales) is where the movie loses it’s footing.

And that’s too bad for Anderson - as is his custom - fills every frame with interesting pictures/visuals that are a marvel to look at and fills almost every minor role with some sort of major star looking to work with him. Almost the best part of this film was to spot the star in a cameo role. Willem DaFoe, Saoirse Ronan, Liev Schrieber, the “Fonz” himself, Henry Winkler, Cristoph Walz and Anderson “regulars” Jason Schwartman, Edward Norton and Owen Wilson (amongst others) all show up - briefly - to lend their talents to this absurdity.

Well worth checking out for the visuals, just don’t look for much in the way of plot or drama.

Letter Grade: B (did I mention that the visuals are STUNNING?)