Bridge in the Menagerie 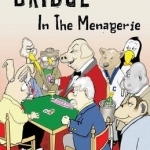 Victor Mollo's Bridge in the Menagerie is on any list of the all-time top ten books on the game. The stories it contains, originally published in the 1960s in Bridge Magazine and The Bridge World, found a worldwide audience in book form. Everyone can relate to the characters (the Hideous Hog, the Rueful Rabbit, Oscar the Owl, and the rest), the bridge hands are brilliant, and the stories themselves hilarious. This is the book against which all subsequent attempts at bridge humour are measured. Bridge in the Menagerie has been out of print for some time, and is reissued now with illustrations by bridge cartoonist Bill Buttle.

Images And Data Courtesy Of: Master Point Press.
This content (including text, images, videos and other media) is published and used in accordance with Fair Use.