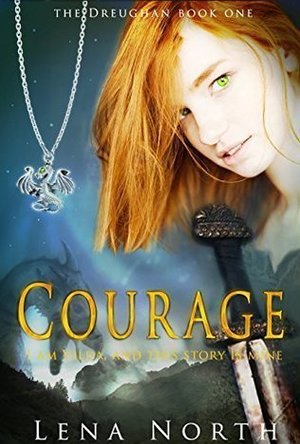 It probably started with the dragon.

I am Vilda, the wild girl with the flaming red hair and glittering green eyes.

I’m different, and I paid for it every day of my life until Valerian of the Waterfolk attacked and I had to flee into the mountains with Troy and our former best friend Susannah.

We ended up in Dragoncourt, the stronghold of the Dreughan, where my life became completely different, and a lot more complicated in so many ways.

Instead of struggling in a muddy little corner of the world I suddenly worry about finding out who my parents really were, how to get out of being promised to the beautiful prince, how to hide that his cousin can speak inside my head… and what happens when Valerian takes me up on that challenge I issued?

Step into the world of the Dreughan and follow Vilda’s journey full of laughter, adventure, and romance in the first book in the Dreughan trilogy, set in a medieval paranormal fantasy world from a thousand years ago.

The Dreughan trilogy can be read standalone, but it’s also the starting point for Ms. North’s Urban Fantasy series "Birds of a Feather".

Images And Data Courtesy Of: FAB Publishing.
This content (including text, images, videos and other media) is published and used in accordance with Fair Use.