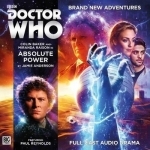 Two thousand years ago, all civilisation on the planet Teymah was wiped out in an AELE - an Anomalous Extinction Level Event. Now, the galactic entrepreneur Lyam Yce hopes, at last, to learn the reason why the ancient Teymahrians went extinct - by funding a huge archaeological dig. While the Doctor probes a strange sphere found by Yce's diggers, his companion, former Bletchley Park cryptographer Constance Clarke, agrees to help translate symbols written in the lost ancient language of the Teymahrians. And soon, they'll learn that ancient Teymah's secrets were best left buried deep beneath its shifting sands. Director Jamie Anderson is the son of Gerry Anderson, the producer behind such shows as Thunderbirds, UFO, Captain Scarlet and Terrahawks. His work influenced generations, and Jamie inherited this storytelling gene! Colin Baker's Doctor has proved hugely popular to fans of the Big Finish Doctor Who releases, with his television adventures continued across a range of stories with both old and new companions. The Doctor's companion in this story - Mrs Constance Clark - is played by Miranda Raison, star of TV's Spooks.Mrs Clark works at Bletchley during the War, and worries about a husband lost in mysterious circumstances.

Images And Data Courtesy Of: Big Finish Productions Ltd.
This content (including text, images, videos and other media) is published and used in accordance with Fair Use.