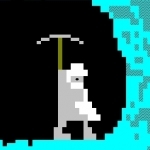 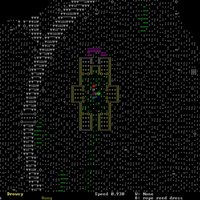 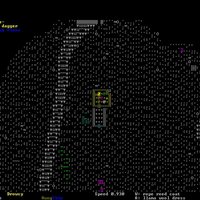 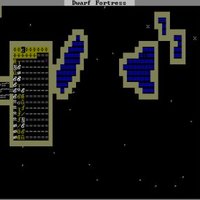 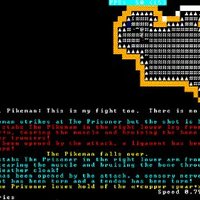 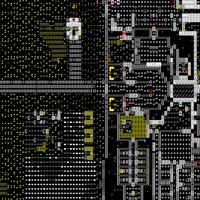 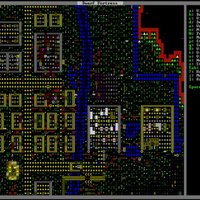 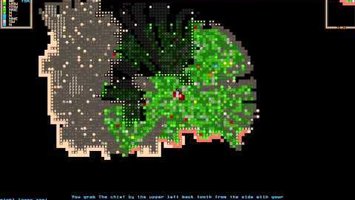 Dwarf Fortress is a single-player fantasy game. You can control a dwarven outpost or an adventurer in a randomly generated, persistent world.

Although Dwarf Fortress is still in a work in progress, many features have already been implemented.

The world is randomly generated with distinct civilizations spanning centuries of detailed history, hundreds of towns, caves and regions with various wildlife.
The world persists as long as you like, over many games, recording historical events and tracking changes.
Command your dwarves as they search for wealth in the mountain.
Craft treasures and furniture from many materials and improve these objects with precious metals, jewels and more.
Defend yourself against attacks from hostile civilizations, the wilderness, the depths, the dead and creatures of the night.
Trade for all manner of exotic goods with your neighbors.
Establish a barony and support the nobility as they make demands of your populace.
Keep your dwarves happy and read their thoughts as they work and relax.
Z coordinate allows you to dig out fortresses with multiple levels. Build towers or conquer the underworld.
Build floodgates to divert water for farming or to drown your adversaries... and don't forget the magma!
Lay out taverns, libraries and temples to enrich your dwarves' lives. What discoveries will your dwarves make?
Accept non-dwarven residents from all over the world as your reputation grows.
Surgery, sutures, splints, crutches and more: care for your wounded dwarves instead of leaving them to fend for themselves.
Retire your fortress, then unretire it after spending time playing other roles in the world.
Honey, wax, pottery, windmills, waterwheels, soap, plaster, wool, eggs, dyes, cheese, glass, animal training, papermaking, parchment, bookbinding and much much more...
Play an adventurer and explore, quest for glory or seek vengeance.
Meet adversaries from previous games.
Recruit people to come with you on your journey.
Explore without cumbersome plot restrictions -- thriving capitals, villages, catacombs, labyrinths, bandit camps, caves and more!
Seamlessly wander the world or travel more rapidly on the region map and in underground tunnels.
Travel by day and search for a place to shelter as night falls.
Build a cabin in the woods with the help of your companions.
Listen to rumors and help out town and civilization leaders.
Earn a reputation as a hero, friend, soldier, enemy, thug, musician, etc. with the various civilizations in the world.
Retire and meet your old characters. Bring them along on an adventure with a new character or reactivate them and play directly.
Z coordinate allows you to move between twisting underground caverns and scale structures, fighting adversaries above and below. Climb, jump and sprint!
Stealth system with vision arcs which also respects vegetation density and other factors.
Use signs like shoe impressions and animal tracks to hunt and avoid danger.
Steal a mummy's treasure or learn the secrets of life and death at a necromancer's tower.
Visit your retired fortresses and ask your dwarves to join you on adventures.
The combat model includes skills, body parts, individual tissues, material properties, aimed attacks, wrestling, one-time opportunities, charging and dodging between squares, bleeding, pain, nausea, various poison effects and much more. Attacks and other movements extend over several instants, allowing you to deliberately catch enemy blows or plan your counter-attack.
Generated poetry, musical forms, instruments and dances. Watch the dwarves perform, or try it yourself!
Hundreds of animals and other monsters, including many that are randomly generated for each world.
Multi-tile climbable trees and many, many kinds of plants. Fruit, flowers and falling leaves.
A dynamic weather model tracks wind, humidity and air masses to create fronts, clouds, rain storms and blizzards.
Over two hundred rock and mineral types are incorporated into the world, placed in their proper geological environments.
Add new creatures, weapons, plants, metals and other objects via modifiable text files.
Extended ASCII character set rendered in 16 colors (including black) as well as 8 background colors (including black).