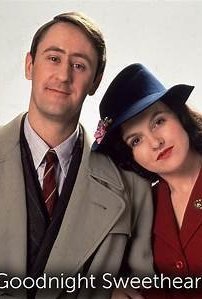 Goodnight Sweetheart is a British sitcom that ran for six series on BBC1 from 1993 to 1999. The show returned on 2 September 2016.. It starred Nicholas Lyndhurst as Gary Sparrow, an accidental time traveller who leads a double life after discovering a time portal allowing him to travel between the London of the 1990s and the same area during the Second World War.