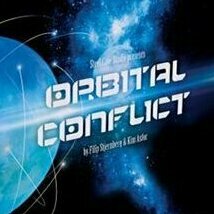 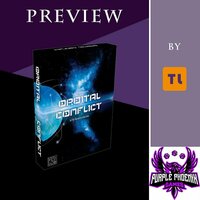 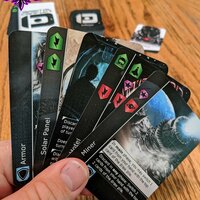 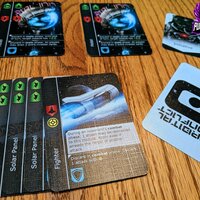 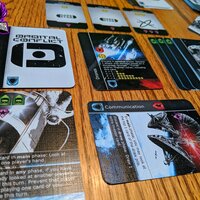 As Earth’s political powers are collapsing and the global economy is on the brink of meltdown, humanity once again looks towards the stars.

You have been given the task to oversee the daring project to establish your organization as the dominant force of the Earth’s orbit. Unimaginable market potential is now within arm’s reach, just waiting to be exploited. In the dawn of a new aggressive space race, conflict is inevitable!

Orbital Conflict is a card game where each player during several turns build and modify a space station and manage its resources. Each turn is divided into three phases. Draw, Main and Combat phase.

In the main phase each player takes turn playing station cards from the hand to the player's station. They can either be played as a standalone module or extend existing once into more advanced modules. Cards can have production, requirements, attack, defense and victory points. The player will try to build a station that meets the demands of the two investor cards draw in previous phase. Investor are worth different amount of victory points, some are easy to claim while others require a big station. Some cards even has special abilities that apply when part of a station. When all have done the main phase the combat phase begins. Unclaimed investor cards are discarded (new once are draw in the draw phase).

In the combat phase a player may choose to attack another player's station using modules with attack values or discard cards from the hand that gives additional attacks.

When the last card in the draw pile has been drawn a last turn is played. Afterwards each player counts victory points from claimed investors and from the station. The player with the highest amount wins the game.

Noteworthy mechanics are no hand limit, that station cards can extend by being placed on top or below existing once. Claimed investor cards have a mini-game like mechanic where they are pushed from the right or left.

Orbital conflict balance station building, light resource management with aggressive combat and point gathering. There is no player elimination and stations can be destroyed and rebuilt several times during a game.