Rent: The Complete Book and Lyrics of the Broadway Musical 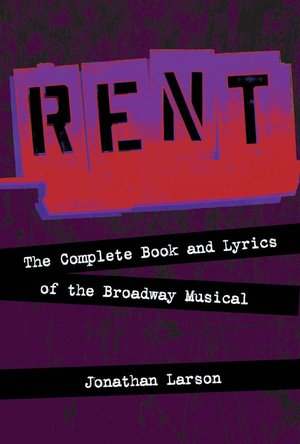 Set on the Lower East Side of New York City, Rent is the story of young bohemians Mark, Roger, Maureen, Tom Collins, Angel, Mimi, Joanne, and their friends, all struggling to create and survive during the rise of a mysterious, deadly disease-AIDS. Socially relevant, youthful, and moving, Rent lives on, along with the affirmation that there is “no day but today.” Rent was a winner of the Pulitzer Prize for Drama as well as four Tony Awards, including Best Musical, Best Book and Best Score for Jonathan Larson, and Best Features Actor in a Musical for Wilson Jermaine Heredia. This libretto includes fifteen color photographs from the original Broadway production.

Jonathan Larson emerged as a composer and playwright in the late 1980s and early 1990s. In addition to Rent, his most critically acclaimed work, he is known for tick, tick … BOOM!, a rock monologue he performed at Second Stage Theatre, the Village Gate, and New York Theatre Workshop that was later produced Off-Broadway. Rent, based on La Boheme, had its world premiere on February 13th, 1996, at New York Theatre Workshop, Larson, however, was not able to be there. He died unexpectedly of an aortic aneurysm on January 25th, 1996, ten days before his thirty-six birthday.

Victoria Leacock Hoffman (Introduction) is a producer, filmmaker, and writer. She collaborated with Jonathan Larson for over a decade and produced Larson’s award-winning musical tick, tick … BOOM! Off-Broadway. She is a founding board member of the Jonathan Larson Performing Arts Foundation.

Main Image Courtesy: @rent.
This content (including text, images, videos and other media) is published and used in accordance with Fair Use.

Added By
Edit this item to be credited with its creation
Rent: The Complete Book and Lyrics of the Broadway Musical Reviews & Ratings (3)
Sorting
Show Filters Filter Applied Reset Filter