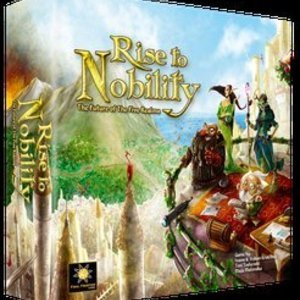 Rise to Nobility is a worker (dice) placement game set in The Five Realms, the same fantasy world as Cavern Tavern. At the beginning of each round, every player rolls 5 dice that represent their available actions in the game. You place the your dice and any settlers you've obtained to various guilds to earn resources, nobility, money and victory points. Through these actions, gain yourself as many victory points as you can over 10 rounds to win the game.

Images And Data Courtesy Of: Final Frontier Games.
This content (including text, images, videos and other media) is published and used in accordance with Fair Use.