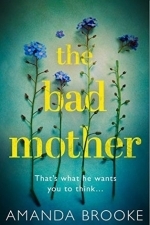 That’s what he wants you to think…

A good mother isn’t a danger to herself.

A good mother isn’t a danger to her baby.

You want to be the good mother you dreamed you could be.

But you’re not. You’re the bad mother you were destined to become.

At least, that what he wants you to believe…

Images And Data Courtesy Of: Harper Collins.
This content (including text, images, videos and other media) is published and used in accordance with Fair Use.