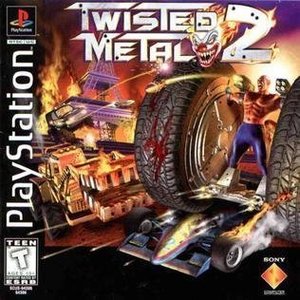 2006: Los Angeles is in ruins and its citizens left to struggle for survival after the conclusion of Twisted Metal, a brutal contest held by Calypso, exactly one year earlier on Christmas Eve. Aboard his airship (running the ticker "CALYPSO RULER OF THE EARTH") in the skies over the destroyed City of Angels, Calypso wonders where the next Twisted Metal will take place; fourteen of the world's best drivers are already assembled to compete for whatever prize they desire. Ultimately, Calypso decides that the world itself shall serve as a battleground. In addition to the remains of Los Angeles, drivers will also battle in Moscow, Paris, Amazonia, New York City, Antarctica, Holland, and Hong Kong.
After defeating all the opponents in Amazonia, the player must face Minion before proceeding to New York City. The Dark Tooth boss fight takes place after the player defeats all the opponents in Hong Kong; once Dark Tooth (and his flaming head) is defeated, the driver meets with Calypso in New York to receive their prize.

Images And Data Courtesy Of: Sony Computer Entertainment.
This content (including text, images, videos and other media) is published and used in accordance with Fair Use.