We Only See Each Other at Weddings and Funerals (The Umbrella Academy: Apocalypse Suite #2) 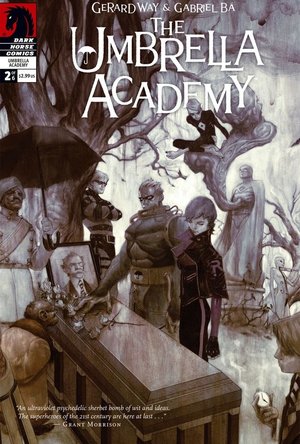 Add New Image or Add New Video
Edit
We Only See Each Other at Weddings and Funerals (The Umbrella Academy: Apocalypse Suite #2)

The next day, 00.01 reunites with his sister and childhood crush, 00.03, who has the power to alter reality with her lies. She reveals that she has recently divorced, and has a daughter. They then reunite with 00.04, who is capable of communicating with the dead, and with 00.02, a rebel with superhuman accuracy with throwing knives. After Sir Reginald Hargreeves' funeral, they talk to 00.05, who reveals he figured out how to travel to the future when they were 10, where he got stuck and he found that the apocalypse had happened; he goes on to explain that he spent the next 50 years trying to return to warn the rest. He states that the end of the world began three days after Sir Reginald Hargreeves' death. In the city, the now estranged 00.07, having never shown any ability beyond the violin, goes to the Icarus Theater. There she is offered a position in the Orchestra Verdammten, a group of musicians claiming they can destroy the world by playing the "Apocalypse Suite;" 00.07 however, refuses to join.

Main Image Courtesy: @theumbrellaacademy.
This content (including text, images, videos and other media) is published and used in accordance with Fair Use.

Added By
Edit this item to be credited with its creation
We Only See Each Other at Weddings and Funerals (The Umbrella Academy: Apocalypse Suite #2) Reviews & Ratings (2)
Sorting
Show Filters Filter Applied Reset Filter