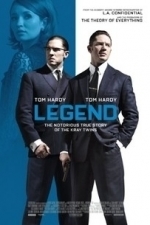 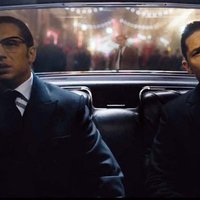 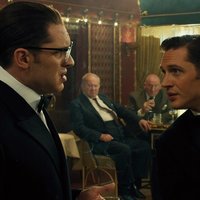 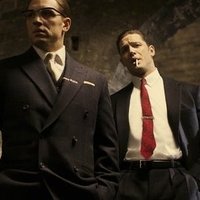 Have you heard of Legend? Not the movie from the mid-eighties, but the story of Ronnie and Reggie Kray (Tom Hardy, playing both brothers). Don’t know who they are, that’s okay, neither did I. But if you are across the pond and are reading this, you probably do. They Kray brothers are twins, and perhaps the most notorious gangsters in London history. Think John Dillinger, or Al Capone, of the UK.

Legend is a story of Reggie and Ronnie Kray’s rise to power as the top gangsters of the East End of London, and beyond. However, it is told from the point of view of Reggie’s wife, Francis Kray (Emily Browning). Though, the movie starts with her meeting Reggie for the first time, and it is really a love story of how she fell in love with a gangster that would not change his ways. There is nothing solely remarkable about the plot of the movie, but it is definitely captivating. I went into the film not knowing much about the Krays, but glad that I didn’t as it might have marred my experience.

Hardy, however, is remarkable in his portrayal of the Kray brothers. Each brother having his own distinctive personality, and even distinctive looks despite being identical twin brothers. Ronnie, as Francis describes him, is a one man mob trying to take control of London. The only catch is that he is paranoid schizophrenic and has trouble in social situations. This leads to a high distrust of people, and some intriguing scenes during the course of the film, especially interacting with Francis and his brother. Reggie is the intelligent, methodical brother who has bigger goals and aspirations than his brother, but his loyalty to his family holds him back. He has a deep loyalty, and even in the height of conflict would not take his anger, or disappointment, out on Ronnie. This did not sit well with Francis, who desperately wanted Reggie to go straight, but still agreed to marry him, even against the wishes of her mother.

There is no rise without a fall, but I won’t give too much insight into that as it will help the movie win you over if you know less. But Hardy and Browning were backed by a wonderful supporting cast including the likes of David Thewlis, Christopher Eccleston, Taron Egerton, and Chazz Palminteri. Hardy himself brought some levity to the more serious scenes, though there were times where I was taken out of the movie as Ronnie Kray had a slight tendency to sound like Bane, Hardy’s previous role in the Dark Knight franchise.

If you enjoy British films such as Rock’n’Rolla, Lock, Stock and Two Smoking Barrels, or Trainspotting, you will definitely enjoy Legend. In fact, Legend is the first movie rated 18+ in the UK to break the box office record set by Trainspotting in 1996. That says a lot about the movie. Will I add it to my collection upon home release? The jury is still out on that, but it definitely was a great film and worth seeing. 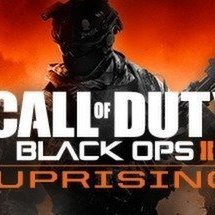 (13 Ratings)
Video Game Rating
With the recent announcement of Call of Duty: Ghosts speculation has run rampant as to what the series has in store especially with the promise of the new gaming engine and new consoles on the horizon. However Call of Duty: Black Ops II shows that there’s still plenty of life left in the game with the release of Uprising, the second of four planned map packs for the game. Uprising is available for the Xbox 360, PlayStation 3, and PC versions of the game and does require the original game in order to play. Players can purchase the map pack individually or as part of a season pass that allows all past and future content for the game to be acquired at a discounted price.

The pack offers for new maps as well as a new zombie mode called Mob of the Dead, which casts players as inmates at Alcatraz which is being overrun by the undead. Gameplay wise it is similar to pass on the modes in net weapons, power ups, ammunition, and access to other areas of the maps can be obtained through purchase using the in game currency accrued from dispatching the undead.

There is also a nice surprise to this that in addition to trying to locate and assemble parts to make your escape, the voice talents of Michael Madsen, Joe Pantoliano, Chazz Palminteri, and Ray Liotta, provide a very nice depth to the game as they helped bring an infusion of personality to the characters which really makes you care about their outcome.

There is an afterlife mode as well which is necessary for accessing certain areas and gathering components needed for survival. It is also very satisfying to shock some of the undead minions while in this gameplay mode. Players were one and make sure to avoid the new boss Brutus who gives out a solid amount of damage every time he appears.

Vertigo is set in a futuristic high-rise in India and requires gamers to be very careful about where they step if they wish to avoid plummeting several stories to their doom. With a circular outside platform and limited indoor areas the emphasis is on using cover as much as possible especially from the abundant cargo and air-conditioning units that litter the map. I found this to be the least satisfying for my style of play as not being able to run, and constantly being at the mercy of snipers did make it very frustrating for me.

Encore is set in London at a music festival and offers a nice mix of options for players of all gaming styles. From the backstage area which is ideal for setting mines and other traps, to the grandstand boxes which offer numerous opportunities for snipers to ply their craft. Since neither these are my style of play, I was content to work my way under the stage, and through the clubs, restrooms, and park areas as well as on stage to catch enemy units transitioning from one point of the map to the other. The key is not stay in one place too long as I start to the run and gun mode and had solid success.

Magma is set in Japan following a volcanic eruption. Having to avoid lava and make your way over cooling areas through the village is definitely a nice visual touch. Everything from fish markets to subway stations and trains are on hand, but players have to be quick on the trigger as there are numerous areas for enemies to hide and blend into the shadows. Once I learned some of the nuances of the map, I did find myself having better luck and have racked up scores closer to my average on this one.

Studio is a reworking of the classic Firing Line map and is set at a Hollywood film studio. From the long areas of the lot which are ideal for snipers as well as the ample rooftop spaces, players must be on their toes because death can come from anywhere at any time. From a T Rex to a crashed alien ship this map has plenty of variety. One moment you are moving through a medieval castle, the next moment you are walking through a saloon and then stomping a miniaturized city like Godzilla. There are also plenty of other great locales and it would be fun just to run through and sightsee if there was not so much mayhem going on around you.

I find it best to avoid snipers zones and make your way through the areas that offer plenty of cover and make great use of the trailers as they certainly provide cover and great areas of transition as well as ambush.

While uprising does not offer anything new in terms of weaponry, equipment, or rewards, what it does offer is several hours of new gameplay enjoyment for friends of the series who are in need of effects while they wait for the next release in the series. With two more map scheduled between now and November, you’ll want to check this out and as long as you are moderate in your expectations understanding these are simply new maps to enhance your gameplay, then you might find yourself really enjoying what is being offered with this diverse yet enjoyable collection.