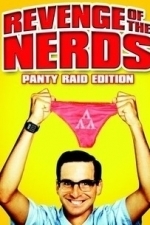 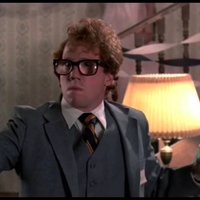 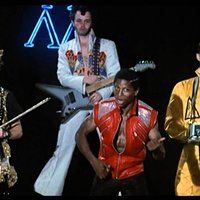 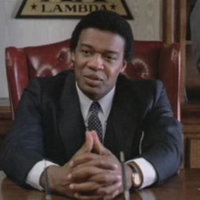 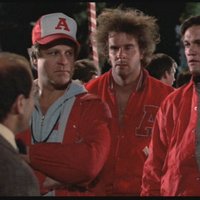 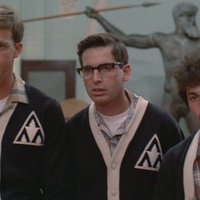 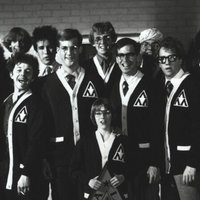 Solid Fun
A fraternity of nerds decide to exact revenge on the jocks that are constantly tormenting them. It's nerds getting revenge. Revenge of the Nerds. A title that says, "Don't think about it. Just enjoy it."

It's tiring watching these nerds get abused constantly. After a constant barrage of douchery by the jocks, you feel empowered when the nerds FINALLY decide to rise up. Everything that happens leading up to that is somewhat frustrating. It throws off the tone a bit for me. You're supposed to be laughing, but you can't help but feel bad for these guys.

Before I venture any further, this has to be said: Lamar (Larry B. Scott) is the absolute best. He was, by far, the scene stealer of the movie. I love characters that can make you crack up with just a few words and mannerisms. He won me over well before the classic limp javelin scene.

That scene is one of quite a few hilarious moments throughout Revenge. When the nerds are together, you never know what will transpire as they all have different personalities and come from different walks of life. Booger (Curtis Armstrong) is a disgusting pig of an outcast who got his name honestly. Takashi (Brian Tochi) speaks bad English and knows little about American culture. Their interaction during a game of cards produced a scene to remember. "What the fuck is a frush?"

It doesn't take long for you to get behind all of these characters and root for their success. And while I can't quite label it as a classic, Revenge of the Nerds is definitely one I can watch multiple times. The plot is implausible and it reaches in parts, but what it lacks in certain areas it makes up for with a solid message that hits on how we should treat people that aren't the same as us. 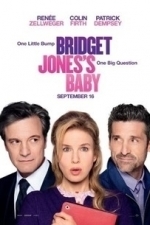 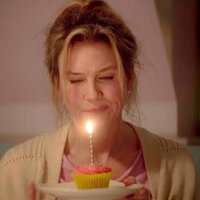 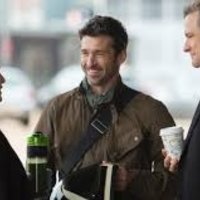 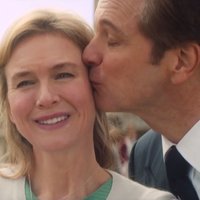 Come the F*** on Bridget… who’s the Daddy?
The world’s favourite lonely-hearts diarist is back. Bridget (Renée Zellweger) once again starts the film ‘all by herself’, haunted by occasional meetings with ex-flame Mark D’Arcy (Colin Firth) – now married to Camilla (Agni Scott) – and facing the natural discomfort of the early funeral of another friend who has died way too young. And at 43, Bridget’s biological clock is also ticking towards parental midnight.

Proving that enormous ditzyness and lack of talent need not be an impediment to a successful career, Bridget is now a top TV floor manager on a cable news station, anchored by friend Miranda (an excellent Sarah Solemani). In an effort to shake Bridget out of her malaise, Miranda takes her to a music festival (featuring some fun cameos!) where she has a one-night-stand with the delectable (speaking at least for all the women in my audience) Jack (Patrick Dempsey). Following another one-night-stand with D’Arcy and finding herself pregnant, a comedy of farce follows with one expectant mother and two prospective fathers competing for Bridget’s affections.

OK. So it’s not bloody Shakespeare. But it is an extremely well-crafted comedy, and as a British rom-com it significantly out-does many of the efforts of the rom-com king – Richard Curtis – in recent years. As a series its just amazing how many of the original cast have been reunited after 2004’s rather lacklustre “Bridget Jones: Edge of Reason”. Particularly effective are Bridget’s parents, played by the delectably Tory Gemma Jones and the ever-perfect Jim Broadbent. And Bridget’s trio of irreverent friends: Shazzer (Sally Phillips), Jude (Shirley Henderson) and Tom (James Callis) are all back. All are either well into parenthood or have impending parenthood, adding to the pressure on Bridget’s aching ovaries.

New to the cast, and brilliant in every scene she’s in, is the ever-radiant Emma Thompson as Bridget’s doctor. Is there any actress in the movies today that can deliver a comic line better-timed than Thompson? I doubt it. Just superb. And Thompson also co-wrote the screenplay, together with Bridget author Helen Fielding and – an unlikely contributor – Ali G collaborator Dan Mazer. All contribute to a sizzling script – not based on Fielding’s poorly received story – that zips along and makes the 123 minute run-time fly by. My one reservation would be – despite the film being set in the current day – lapses into internet memes like Hitler Cats and song crazes that are at least five years out of date. But I forgive that for the Colin Firth ‘Gangnam’ line, for me the funniest in the whole film.

Zellweger looks fantastic, pulling off the 4 year age difference from her character with ease. And isn’t it wonderful to see a middle-aged character as the centre of a rom-com for once? Hollywood would be well to remember that romance is not restricted to the 20-somethings. Certainly the packed cinema – filled with probably 90% (well oiled) women – certainly thought so, in what was a raucous and entertaining showing!
The music is superbly supported by an epic soundtrack of well-chosen tracks from Ellie Goulding, Years and Years, Jess Glynne, Lily Allen (with very funny adult content!) and classic oldies, all wrappered with nice themes by the brilliant and underrated Craig “Love Actually” Armstrong.

Sharon Maguire – the director of the original “Diary” – has delivered here a fun, absorbing and enormously entertaining piece of fluff that deserves to do well. And it has in the UK, making $11M in its opening weekend here and playing to packed showings. However – incomprehensibly – it has bombed in the US with only $8M coming in. Hopefully it might prove a bit of a sleeper hit there: come on America… we go to see all of the rubbish rom-coms you send over here, and this is way better than most of those!
This was a film I was determined to be sniffy about with my rating. But as a) I enjoyed it very much and b) a packed audience of women can’t be wrong…
Kudos