(4 Ratings)
Book Rating
<i>Fantasy in Death</i> is an interesting take on the death-by-gaming plot that has previously been done by a couple of fantasy and science fiction authors, most notably in Niven and Barnes' Dream Park series. I doubt that most of Robb's readers will be familiar with the other books, as they're probably coming from the romance world (crossing over from her Nora Roberts titles) instead of the science fiction genre.

What hit me the most, though, was nostalgia for the dot com boom. The portrayal of the hot start-up company with its open, cheerful offices full of tech toys and energy, well-paid employees on fire with ideas and enthusiasm happily burning the midnight oil to work on exciting projects&mdash;I remember those days! Okay, the technology wasn't as advanced as the stuff in the book, but I can relate.

I always enjoy the portrayal of Dallas and Roarke's relationship as a mature partnership. It is a bit clich&ecuted at this point that every case has some aspect that justifies bringing in Roarke as a civilian consultant, but it's part of the formula. The sex is somewhat paint by numbers by now, too, but as prolific as Robb/Roberts is, I'm wondering if she has templates for different series and she has her own <a href="http://en.wikipedia.org/wiki/Stratemeyer_Syndicate">Stratemeyer Syndicate</a>-type operation going on somewhere. (I've never read anything but the Eve Dallas books, so please take that as the joke it's meant to be!)

I was a little disappointed in the reveal, as I felt that the bad guy was too obvious. I won't say more, as I don't want to give anything away. I'll probably continue reading the series, but I'm past feeling an urgent need to grab them as soon as they come out, and this definitely isn't one of the few series that I could re-read and enjoy.

The whole point of these little anthologies is to introduce readers who enjoy an established author's work to other, similar authors, right?

However, I don't read the NR stuff. I only read her JDR books, which have a little romantic spice about the main character, Eve Dallas, and her husband Roarke, with occasional glimpses into Eve's partner, Peabody's, relationship with her guy, McNab. That's it, though. Neither of those sets of relationships are the focal point of the plots. The mystery/crime is the main thing, and while they're set in the future with the advantages of technology we don't yet have, they're essentially police procedurals. (I don't consider them SF, quite, because all the tech seems to be extrapolated from what we have now, and quite plausible. And, of course, the tech isn't the point of the stories, either.)

So why not put similar stories in an anthology anchored by a JDR story? Why why why? Misleading and disappointing readers is NOT the way to garner any positive buzz for the lesser-known authors, and the backlash can lead to less enthusiasm from established readers (like me) for the established author's work.
Kudos 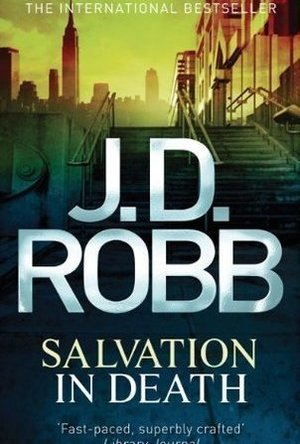 (4 Ratings)
Book Rating
Lovely portrayal of the relationship between the two lead characters (1 more)
Some hilarious moments
A large number of characters make it difficult to follow at times (0 more)
Gripping And Very Interesting!
Immediately after drinking the wine during a Catholic funeral mass, Father Miguel Flores is dead on the altar. Detective Lieutenant Eve Dallas confirms that the consecrated wine contained potassium cyanide. Though the East Harlem neighbourhood is a long way from the stone mansion she shares with her billionaire husband Roarke, she knows she's looking for a murderer.

The autopsy reveals faint scars of knife wounds, a removed tattoo and evidence of plastic surgery, suggesting “Father Flores” may not be the man his parishioners thought. Now, as Eve pieces together clues that suggest identity theft, gang connections, and a deeply personal act of revenge, she hopes to track down whoever committed this unholy act. Then a second murder takes place, in front of an even larger crowd of worshippers. Are the homicides linked?

Salvation in Death is the 27th book of the "In Death" series, with Eve and Roarke as the lead characters.

Salvation in Death begins with the poisoning of a Catholic priest during mass. The priest, a passionate, dedicated and energetic member of the community, seems to have no enemies. He cared especially about young people, was not depressed, stressed or troubled and every member of the church looked up to him. But when his autopsy reveals some old scars and a covered tattoo, Eve realises that the priest must have some dark secrets in his past. When the tattoo points to a ruthless badass gang, Eve is not convinced that the priest is the person he purports to be. When another religious leader is also killed, Eve and her team have to investigate whether there is a serial killer on the loose or if the cases are coincidental in their timing.

This is the first book I have read from the "In Death" series by J. D. Robb, the pseudonym of Nora Roberts. I loved the portrayal of the relationship between the two lead characters, Eve and Roarke, particularly,

"Everything and all things. That was Eve for him. Nothing he'd ever dreamed of, even in secret in the dirty alleys of Dublin, approached the reality of her. Nothing he possessed could ever be as precious. The taste of her in the cool night, in the pale light, stirred a craving he understood would never be fully sated."

There is an impressive number of characters in this crime novel which I have to say made it a little difficult to follow at times. Others that I found an affinity with were Peabody and her significant other and work colleague, McNab.

"They were a good ten feet from the Homicide bullpen when Peabody's nose went up like a hound on the hunt. "I smell doughnuts." When Peabody increased her pace, Eve started to roll her eyes, but then she smelled them, too."

I also liked the following quote including McNab:-

Eve is really out of her comfort zone investigating murders that have taken place in Catholic churches. She obviously has a past that she has to come to terms with which she seems to make some progress in Salvation in Death. Roarke and she have a great deal of chemistry between them and are very hot together and Roarke has some hilarious moments that make him adorable. He is there for her when certain aspects of the case trouble her and she is needing clarity, but she is by his side when he is struggling with some bad memories of his own. They make a brilliant team and I can't wait to read more of them.

I really surprised myself in that I chose to read this crime novel at all as I don't generally go for books relating to Catholicism. However, I thought it was very nicely written and I found it thoroughly enjoyable. The ending was a surprise to me, and I loved the way the book was concluded. Reading Salvation in Death has inspired me to read other "In Deaths" and also other Nora Roberts novels.

Overall, Salvation in Death is a gripping and very interesting read.
Kudos