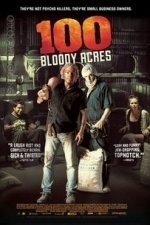 (1 Ratings)
Movie Rating
Story: 100 Bloody Acres starts as we meet one of the brothers Reg (Herriman) who is a part of an organic fertiliser business, after Reg picks up a dead body, he finds himself drawn into picking up three hitchhikers, Sophie (McGahan), James (Ackland) and Wes (Kristian) who are heading to a music festival for a binge filled weekend.

Once Reg arrives back to his brother Lindsay (Sampson) the hapless brothers must decide to kill the three to continue to produce the highly popular fertiliser and keep their reputation up or let them go.

Characters/Performance – Reg is the simple-minded brother who is always out to impress his brother, he brings the victims back to the factory. Lindsay is the brains of the act and he must clean up the mess Reg has left him in. He will go through with any killing. Sophie is the main reason Reg stops, she is travelling with her boyfriend but been cheating on him with their other friend. James just believes he is going to have the life he planned with Sophie. Wes is the traveller who enjoys a drug or two finding himself high through the whole film.

Performance wise, Damon and Angus are both good as the brother showing good chemistry as they do come off very different. Anna, Oliver and Jamie are all fine in the victim roles without coming off as interesting characters.

Story – The story has moments that feel fresh in places but in the main it is all just another version of group of travellers get taken by isolated people who must fight to survive or become the latest victims. It has good moments but doesn’t end up being the most memorable story in the genre.

Comedy/Horror – The comedy is good in places and does add to all the events of the film as it is almost what could go wrong does go wrong. The horror works in places too as we get the gore from it.

Settings – The Australian outback always makes for a good setting as we know how isolated the places are when it comes to the horror.

Special Effects – The effects work when needed without being used too often, the highlights come from the wild trip Wes is going through.

Final Thoughts – You want to see an Australian version of Tucker & Dale versus Evil, then this is for you but it doesn’t quite live up to the levels of that one. 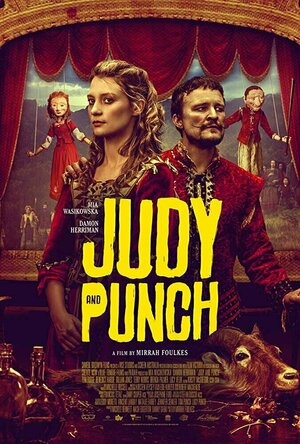 (3 Ratings)
Movie Rating
This had been low on my list of things to see at the film festival but several people recommended it to me so I decided to take a look.

In the town of Seaside, which is nowhere near the sea, Judy lives in something less than domestic bliss with Punch and their baby. Punch's shows are a hit and he's got dreams of grand things, but Judy is the real brains behind the outfit though he'd never admit it.

Judy leaves Punch in charge of the baby while she runs errands but despite the responsibility he gets drunk and an unforgivable accident occurs. In his effort to cover his tracks Punch puts his wife on a journey that leads her to a community in the woods where she can plan her revenge on him for his evil ways.

The film has a very heavy sense of fairy tale about it and certainly the setting wouldn't be out of place in almost any tale you could bring to mind. The location and buildings are perfect and yet somehow didn't seem quite right, this is very much an afterthought though, as I watched it I thought the depiction was good.

The parallels shown between the story of the couple's home life and the puppet show are clear throughout, my only worry is that you might not get a good understanding of that if you aren't aware of the traditional Punch and Judy shows. This wouldn't have been something I'd have thought about before but more and more I talk about things with people and the response is "I've never heard of that"... god I feel old.

Damon Herriman has taken off his Manson mask for this one and I found him to be a very good lead as Punch. He manages to capture the devious side of Punch, and honestly, anyone who can pull off the scene with the baby with a straight face deserves recognition... and yes, I do feel kind of bad for laughing.

Mia Wasikowska (who also starred in Blackbird, review coming soon) had two very different versions of Judy to play. Judy-1 gives us an outgoing and resilient woman, Judy-2.0 is angry and vengeful though there's a happiness in her once she gets to know the community who rescue her. This second incarnation wasn't entirely to my liking, I much preferred the earlier more lighthearted take on her. I can see why the change in her demeanour was fitting it didn't quite feel like a true transformation.

I enjoyed Judy & Punch, it was something different to watch which I always find to be an interesting experience but I'm not sure I'd need to see it again. I was entertained while I sat through it but apart from one scene there was nothing I see myself remembering further down the line.

Just a couple of honourable mentions: I enjoyed the music, the jazzed up classical pieces fit in nicely, and the dog wearing its own ruff? Adorable!

What you should do
I don't think you need to rush out and see this one but if you happen to come across it at some point it might be worth watching.

Movie thing you wish you could take home
It has to be an impish little dog wearing a ruff... because what else would a sensible person pick?!
Kudos