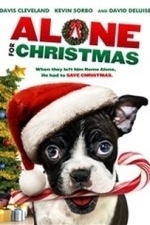 (1 Ratings)
Movie Rating
UK DVD release title, Bone Alone.
Shopping in Tesco each week involves a traditional visit to the DVD aisle to look for bargains and new releases. At this time of year that also means some quality seasonal content that you've never heard of before... and so I give you, Bone Alone!

When Bone gets in trouble for the antics of his little brother Columbus he's banished to a dogsitter as the family go off for the holidays.

Bone, with the help of the other dogs, makes an escape after he realises his home is in danger. A group of burglars have their sights set on their valuables, but this is Bone's house and he has to defend it.

The first thing you will notice about Bone Alone is the absolutely ridiculous effects used to animate the dog's mouths, it's truly awful, but thankfully it's easily forgotten once you get into it because... dare I say it? This film is pretty entertaining.

Add some dogs to a film and you've got me keen, get those dogs to execute a Home Alone plan on some unscrupulous baddies? Sold! Bone does not let his lack of opposable thumbs stop him making his house a fortress that even Kevin would be proud of. Honestly, I don't know how he thought of some of them, I'll be adding them to my own battle plan options shortly.

We've obviously got quality acting from the canine contingent, especially from our lead actors, Hooligan and Torpedo playing Bone and Columbus. Plus there are lots of little cameos from other floofy talents.

The human cast is classic TV movie, acting that's just cheesy enough that the film appears to not take itself too seriously. It's headed up by one of TV's favourite dads, David DeLuise, and as always he's the right sort of amusing to make the role work. The villains have your favourite traits but out of the three of them my favourite was definitely Phil played by John Kenward, he's the adorable buffoon that you really kind of feel for in the whole thing.

Generally the cast isn't made up of people you'd recognise, but then you spot Kevin Sorbo... I don't know what he's channelling when it comes to this role but it's not entirely good. There's a whole section of his story that I zoned out of, that was probably the only part of this masterpiece that I didn't get along with.


Bone Alone is a really fun film because it's equal parts ridiculous and amusing. I can't say there's much in it that's going to make cinematic history but I liked it and that's really all that matters.