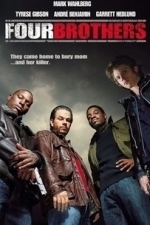 (6 Ratings)
Movie Rating
Revenge and Vengeance
Four Brothers- is a good movie. It has action, suspense, thrills and chills.