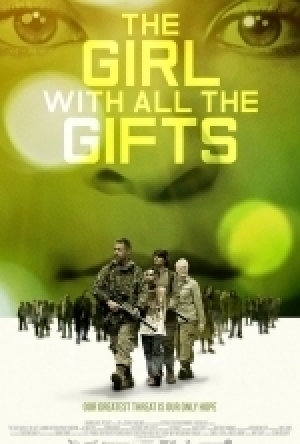 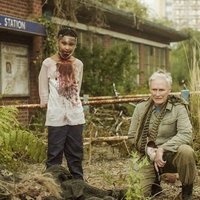 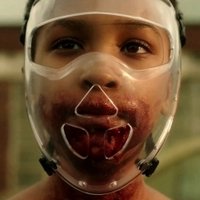 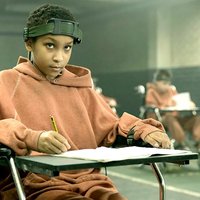 An Adam’s Apple for Teacher.
I remember once having a ridiculous drunken dispute at a works Christmas party many year’s ago that went along the lines of “if you had the chance to save the world, but had to kill your child to do it, what would you do”. There’s a variant of this conundrum at the heart of this brilliant new film from Colm McCarthy, best know for his TV work on shows like “Peaky Blinders”, “Sherlock” and “Dr Who”.
As most people already realise, this is a ‘Zombie film’ (cue, a number of other single blokes in the cinema) and illustrates the dangers of not treating that Athlete’s Foot as soon as it appears! I would normally provide a quick synopsis here, but I really think this is a case in point where it is best to go into the film as blind as possible to the story and let it envelop you. (This includes not watching the whole trailer if possible.) To merely set the scene, we open with a morning school ritual like none you’ve seen before: children strapped to wheelchairs by heavily armed military in their cells; wheeled to an underground classroom; then made to sit in serried rows being taught by their teacher Helen Justineau (a deliciously un-made-up and natural Gemma Arterton). What IS going on? Who ARE these children? WHY are the soldiers so scared and dismissive of them?

The ever-great Paddy Considine (“Pride”) plays army Sergeant Parks (who also has a bit of a crush on Helen) and Glenn Close plays Dr Caroline Caldwell, who is studying the children in more ways than one.

This trio of stars, supported notably later in the film by Fisayo Akinade as the trooper Kieran, turn in what is a superb ensemble performance. As for Glenn Close, I have never quite been able to shake her awful “silk blouse” performance in “Air Force One” from my mind, but here she is quite memerising in the role of the Doctor on a mission: I would suggest a career best. Her final scene reflects such a complex range of emotions, and is brilliantly executed. And Gemma Arterton pulls out all the emotional stops in what is also one of the performances of the year.

But good as these performances are, they would be nothing without the central performance of young Sennia Nanua as the titular “Girl”. I have made the point before that there should be an Oscar category for “Young Actors” rather than pitch them into the adult categories like Quvenzhane Wallis and Anna Paquin were (successfully). Here in her debut feature performance Sennia is just mesmerising and (provided this film gets the recognition it justly deserves) she should be a shoe-in for the BAFTA Rising Star award next year, if not an Actress nomination. A young lady most definitely to watch.

Also assuming a starring role is Chilean-born composer Cristobal Tapia de Veer’s astonishingly effective music which drives up the tension superbly. This is his feature film debut and another name to watch.
The screenplay by Mike Carey from his original novel is beautifully crafted, with some great one liners dropped in to ease the tension a notch. And the story adds a level of emotional depth and angst that surpasses other films of this genre, at least as far back as the “28 Days” films.

Astonishingly, the film was made on a budget of 4 (FOUR!) Million Pounds, giving it a BvS quotient of 2.1%!! Every penny of that budget is up on the screen, and whilst you might like to pick at a few of the matte paintings and effects, it is a remarkably achievement in special effects (Nick Rideout is the SF supervisor) and production value.
So, its great! Go see it… but with a few caveats: it is a zombie film, and it ranks about an 8.9 on the splattometer scale, which might not be to some tastes; definitely don’t go to see it if you are pregnant (though I am constantly reminded how I took my heavily pregnant wife in 1985 to see “A really great film called ‘Alien'”); and you might want to avoid it if you are a great cat or dog lover, or indeed a pigeon-fancier. Other than that, get yourself down to a multiplex and see this great British film: surely a classic to be recognised for years to come.