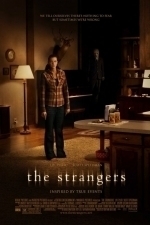 (21 Ratings)
Movie Rating
This House Isnt A Home
The Strangers- is a slow pace horror film, it doesnt get good until the 30 minute mark. Than slowly it get good, but it takes its time. The best moments of this film was the last 30 minutes of this film.

The plot: Kristen (Liv Tyler) and James (Scott Speedman) are expecting a relaxing weekend at a family vacation home, but their stay turns out to be anything but peaceful. First, a mysterious and dangerous woman arrives at the door while James is out on an errand. When he returns, he accidentally kills his friend Mike (Glenn Howerton), mistaking him for an intruder. And then real danger does show up -- in the form of three masked torturers, leaving Kristen and James struggling for survival.

Its slow and overall a decent film.