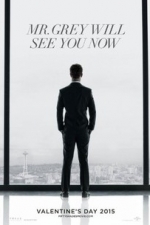 (15 Ratings)
Movie Rating
remember thinking, after reading the first couple of chapters of Fifty Shades of Grey two years ago, “Is this guy a vampire?” E.L. James’ description of Christian Grey brought to mind Edward of the Twilight series and the heroine, Anastasia Steele’s clumsy entrance into Grey’s office reminded me of Bella. I was so certain I would find out Grey was a vampire in the following chapters.

So it wasn’t too much of a surprise for me when I learned the book started out as Twilight fan fiction. The hero and heroine were clearly patterned after Bella and Edward. So whenever someone asked me what the book was about, I would tell them, “It’s an awfully written Twilight with a lot of sex and some bondage and spanking. “ That being said, I’m hardly a book snob. I’ll read just about anything, and while I may complain the whole time, I’ll finish the series if one exists. But even casual readers should be able to recognize badly written fiction when it smacks them in the face like Fifty Shades of Grey.

When I heard they were making a movie, I figured it would be a Rated R or NC-17 version Twilight. I played the game along with other millions of women on who should be the leads. I picked Anna Kendrick and Ian Somerhalder. I wasn’t too disappointed with the actual picks (I think that required actually caring), but the trailers did not endear Dakota Johnson to me at all. On the way to the screener, I joked with my husband, Gareth, that I expected to see Dakota Johnson and Jamie Dornan doing a lot of gasping or scowling with mouth agape since that seemed to be their go-to reactions in the book. (James is fond of writing about jaw-drops and sharp intakes of breath in her books).

I had to make him promise to refrain from making Mystery Science Theater 3000 commentary during the movie, but within the first 5 minutes he recognized some landmarks and leaned over to ask “Wait. She went to WSU?” When I nodded, Gareth, a proud UW Husky, leaned back, shook his head and muttered, “Already disappointed.” We both actually enjoyed seeing the Seattle backdrop, all shiny and urbane, at least in Grey’s world. I thought Gareth was talking about the ridiculousness of Christian Grey’s wealth when he whispered, “This movie is so full of it.” I raised my eyebrows at him and he said, “You know you can’t find parking that easily in Seattle.”

Being familiar with the books, I knew what to expect and for the most part, director Sam Taylor-Johnson, greatly improved on weak source material. Dakota Johnson was a pleasant surprise, making Anastasia smart, witty and much more relatable than the book Ana. Jamie Dornan was very easy to look at. Listening to? Not so much. It’s been reported that E. L. James’ insisted the dialogue from her books remain unchanged. One wonders if she also insisted Dornan deliver his parts as if he were reading her book. Reluctantly and under great duress.

Fans of the books will notice a few changes, and of course it won’t be as graphic as the book, but there are at least 25 minutes of steamy scenes. All in all, this may be one of those rare times the movie is better than the book. Like the books, now that I’m invested, I will watch the next two in the trilogy. Mainly thanks to Dakota Johnson. If nothing else, I have to give Fifty Shades of Grey credit for inspiring passion – in debates about abusive relationships, true BDSM and the age-old bad boy vs. good men attraction. I don’t think I’ve engaged in this many debates with friends and coworkers about a non-sci-fi movie before. It could very well inspire all kinds of other passion for those who give in and escort their significant other to this movie this weekend. But hopefully, unlike the leads in the movie, those inspired will reach a satisfying finish rather than a stylized fade-out to the morning after.