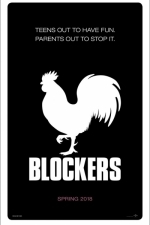 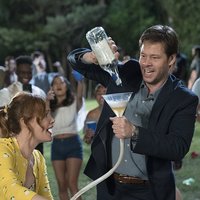 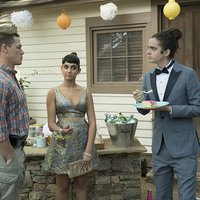 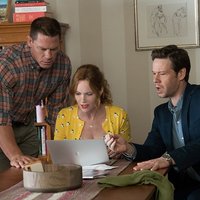 Three childhood friends, Sam (Gideon Adlon), Kayla (Geraldine Viswanathan) and Julie (Kathryn Newton, make a pack that they will all have sex for the first time with their dates on prom night. They get together at Julie’s house the night of prom to and get sent off by all families. They head out in a limo for the most memorable night of their lives. Little do they know that Julie left her laptop on with their group chat open. Julie’s mom, Lisa (Leslie Mann), finds the laptop and with the help of Kayla’s dad, Mitchell (John Cena), and Sam’s dad, Hunter (Ike Barinholtz), they decipher the emoji messages and discover the girls’ sex pact. Lisa a single mom, who just found out that her daughter has been accepted to a college thousands of miles away, thinks her daughter is making a huge mistake and wants to confront her. Mitchell, an overprotective father, agrees and they decide to race after the girls to confront them at the dance. Hunter who has been out of his daughter’s life and just wants her to have a great night tries to first talk them out of it, then physically stop them as they get into Lisa’s car. All three in the car they speed off to what will definitely me a memorable prom night for them and their three daughters.

This comedy is the directorial debut for Kay Cannon (writer Pitch Perfect 2, screenplay Pitch Perfect, actress How to Be Single). She does a good job and this is a well-made comedy. The story does an okay job of blending comedy with a heartfelt story of the relationship between parents and children. There are definitely parts that had the audience roaring in laughter. The jokes at time were a little juvenile and for shock value alone, but other times were very witty. There is also a decent amount of cheesiness in this film that didn’t necessarily fit all of the time. With a rooster in front of the title you have to assume there are going to be some raunchy moments. Over all the performances were good. John Cena has some very funny moments but also some pretty campy lines. I did feel his character had the same moment several times though. They had him cry multiple times throughout the film and by the end the big tough guy crying grew old for me. Ira Barinholtz has some fun moments also.

Sometimes the best moments in a comedy are spoiled in the trailers and for me they did a good job of putting enough of the high points in the trailer will out ruining the punchline. I found myself enjoying the buildup to the payoff more than the big finish. I thought that seeing this film in a theater also helped as many of the laughs more contagious audience laughter than punchlines. Overall I left the theater enjoying the film and thinking it was better than expected. 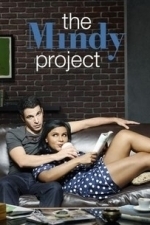 (2 Ratings)
TV Season Rating
The first season of Mindy Kaling's comedy drama, along with its second, is probably one of the best romantic comedies to come from American network television in a while. In fact, the one that is equal to it is New Girl and they were both on Fox at the same time and shared the same night in the UK where they aired on E4.

In a time when adult flavoured romantic comedies are dying at the box office and are finding a home on streaming services such as Netflix, it's good to see that there is a conventional home for themand right from its opening episode, The Mindy Project is all about someone who has watched too many romantic comedies and wants their life to be one.

There are many references throughout to the works of Nora Ephron and Garry Marshall, and with Kaling on writing and lead acting duties, the series work wonders. Even better, it's filled with an ensemble cast that works brilliantly. The series will have a rotating cast throughout its six season on the air, but it says something that at this stage that Ike Barinholtz is a scene stealer from the point he shows up.

The cast does rotate around the place until it settles down in season two, the most notable high profile member of the first season being Anna Camp who disappears halfway through, while Amanda Setton's character Shauna also disappears without a mention.

It would be nothing without Kaling who holds it together brilliantly. The first two seasons are a lighter concoction compared to where the series will go post-season two, not to mention its move to Hulu, but with rom-com successes like Crazy Rich Asians being all too rare nowadays, it's good to know a series with charm, sophistication, and not afraid of the odd fart joke every now and then could find a home on a mainstream network, even if it was for three seasons.
Kudos 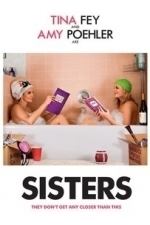 (5 Ratings)
Movie Rating
Life for sisters Maura (Amy Poehler), and Kate (Tina Fey) has not worked out the way they had planned. Maura is a nurse who lives in Atlanta and two years after her divorce is busy doing do-good projects and learning to make cheese in her spare time.,

Kate is a single mom who cannot hold a job and has recently been kicked out of the place she was living in. When their parents inform Maura that they are selling their childhood home, Maura helps Kate travel to Orlando in an effort to convince their parents to change their minds.

Seeing that the deal is pretty much done and that their parents are now in a condo, Maura and Kate opt to spend their time in their old home, and do whatever they can to discourage the prospective new buyers from following through on the purchase.

Kate has always been the wilder of the bunch and decides that Maura needs to let loose for once. As such they opt to recreate a party from their teens with as many of their former classmates as they can gather.

Naturally as anyone who has ever seen a house comedy knows, this is a disaster in the making as everything from drunken party games to a drug mishap and sex accidents follow.

It is different to hear Poehler and Fey use R-rated language as they have kept much of their career to the wink and a nod style of adult humor that their pioneered on Saturday Night Live but once you get used to it, it does not seem overly forced.

The two have a real chemistry and there are many funny scenes in the film, the biggest issue is the transition and setups can be a bit slow and at times awkward. This is to be expected from people who started in sketch comedy and neither of the two had a hand in writing the film as well.

Ike Barinholtz does great supporting work as a love interest and his “accident” is one of the funniest and most cringe worthy moments in film comedy.

If you can handle the slow parts and need some good laughs, then you will want to check out “Sisters’ as it is mindless and raunchy fun.