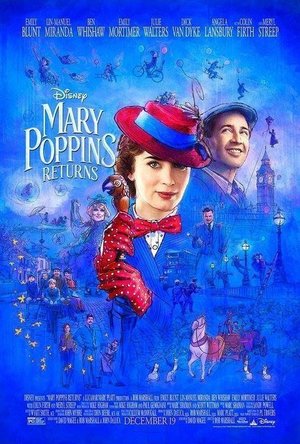 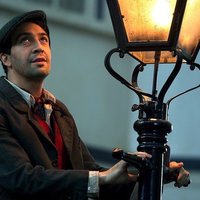 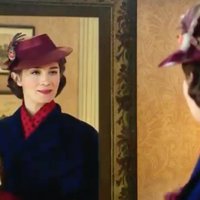 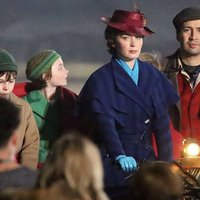 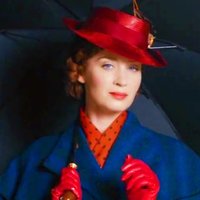 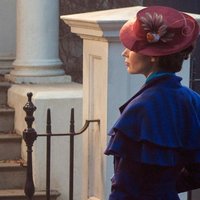 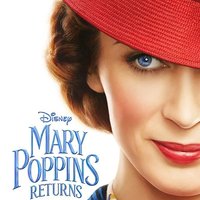 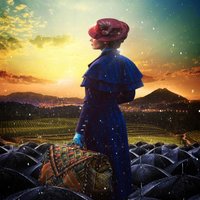 A valiant attempt to recreate a masterpiece.
How do you repaint a masterpiece: the Mona Lisa of children’s fantasy cinema? Some would say “You shouldn’t try”.

As I’ve said before, Mary Poppins was the first film I saw when it came out (or soon afterwards) at a very impressionable age…. I was said to have bawled my eyes out with “THE MAGIC NANNY IS GOING AWAY!!” as Julie Andrews floated off! So as my last cinema trip of 2018 I went to see this sequel, 54 years after the original, with a sense of dread. I’m relieved to say that although the film has its flaws it’s by no means the disaster I envisaged.

The plot
It’s a fairly lightweight story. Now all grown up, young Michael from the original film (Ben Whishaw) has his own family. His troubles though come not singly but in battalions since not only is he grieving a recent loss but he is also about to be evicted from 17 Cherry Tree Lane. Help is at hand in that his father, George Banks, had shares with the Fidelity Fiduciary Bank. But despite their best efforts neither he, his sister Jane (Emily Mortimer) nor their chirpy “strike a light” lamplighter friend Jack (Lin-Manuel Miranda) can find the all-important share certificates. With the deadline from bank manager Wilkins (Colin Firth) approaching, it’s fortuitous that Mary Poppins (Emily Blunt) drops in to look after the Banks children – John (Nathanael Saleh), Anabel (Pixie Davies) and Georgie (Joel Dawson) – in her own inimitable fashion.

Songs that are more Meh-ry Poppins
I know musical taste is very personal. My biggest problem with the film though was that the songs by Marc Shaiman were, to me, on the lacklustre side. Only one jumped out and struck me: the jaunty vaudeville number “A Cover is not the Book”. Elsewhere they were – to me – unmemorable and nowhere near as catchy as those of “The Greatest Showman“. (What amplified this for me was having some of the classic Sherman-brothers themes woven into the soundtrack that just made me realise what I was missing!) Richard M Sherman – now 90 – was credited with “Music Consultant” but I wonder how much input he actually had?

The other flaws
Another issue I had with the film was that it just tried WAAYYY too hard to tick off the key attributes of the original:

‘Mary in the mirror’ – check
‘Bottomless carpet bag’ – check
‘Initial fun in the nursery’ – check
‘Quirky trip to a cartoon land’ – check
‘Dance on the ceiling with a quirky relative’ – check
‘Chirpy chimney sweeps’ – check (“Er… Mr Marshall… we couldn’t get chimney sweeps… will lamplighters do?” “Yeah, good enough”)
Another thing that struck me about the film – particularly as a film aimed at kids – is just how long it is. At 2 hours and 10 minutes it’s a bladder-testing experience for adults let alone younger children. (It’s worth noting that this is still 9 minutes shorter than the original, but back in the 60’s we had FAR fewer options to be stimulated by entertainment and our attention spans were – I think – much longer as a result!)

What it does get right
But with this whinging aside, the film does get a number of things spit-spot on.

Emily Blunt is near perfection as Poppins. (In the interests of balance my wife found her bizarrely clipped accent very grating, but I suspect P.L. Travers would have approved!). Broadway star Lin-Manuel Miranda also does a good job as Jack, although you wonder whether the ‘society of cockney actors’ must again be in a big grump about the casting! I found Emily Mortimer just delightful as the grown-up Jane, although Ben Whishaw‘s Michael didn’t particularly connect with me.

Almost unrecognisable was David Warner as the now wheelchair-bound Admiral Boom. His first mate is none other than Jim Norton of “Father Ted” Bishop Brennan fame (thanks to my daughter Jenn for pointing that one out)!

Also watch out (I’d largely missed it before I realised!) for a nice pavement cameo by Karen Dotrice, the original Jane, asking directions to number 19 Cherry Tree Lane.

What the film also gets right is to implement the old-school animation of the “Jolly Holidays” segment of the original. That’s a really smart move. Filmed at Shepperton Studios in London, this is once again a great advert for Britain’s film technicians. The London sets and the costumes (by the great Sandy Powell) are just superb.

Some cameo cherries on the cake
Finally, the aces in the hole are the two cameos near the end of the film. And they would have been lovely surprises as well since neither name appears in the opening credits. It’s therefore a CRYING SHAME that they chose to let the cat out of the bag in the trailer (BLOODY MARKETING EXECS!). In case you haven’t seen the trailer, I won’t spoil it for you here. But as a magical movie experience the first of those cameos moved me close to tears. He also delivers a hum-dinger of a plot twist that is a genuinely welcome crossover from the first film.

Final Thoughts
Rob Marshall directs, and with a pretty impossible task he delivers an end-product that, while it didn’t completely thrill me, did well not to trash my delicate hopes and dreams either. Having just listened to Kermode and Mayo’s review (and it seems that Mark Kermode places Poppins on a similar pedestal to me) the songs (and therefore the “Place Where Lost Things Go” song) just didn’t resonate with me in the same way, and so, unlike Kermode, I mentally never bridged the gap to safely enjoying it.

But what we all think is secondary. Because if some three or four year old out there gets a similarly lifelong love of the cinema by watching this, then that’s all that matters.