Bruce Robinson recommended All the President's Men (1976) in Movies (curated) 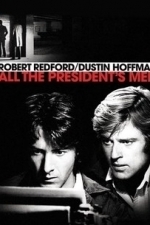 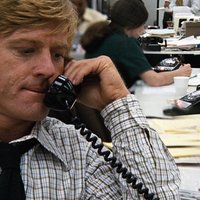 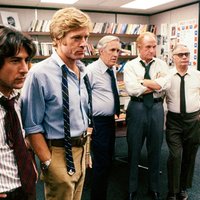 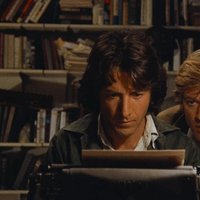 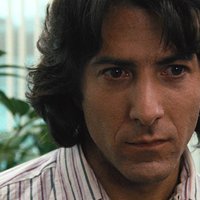 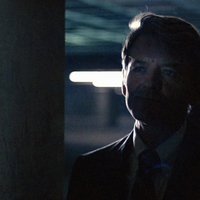 "All the President’s Men, because of my hero, William Goldman, who wrote that film. Here we’re sitting in the dark watching a movie and we all know what the denouement is — we all know how this film’s going to end up; they’re going to bust Nixon’s ass — and yet we’re on the edge of our seats all the way through that movie. Of course, it’s Pakula’s fantastic direction and these fabulous actors at the height of their career — Hoffman and Redford — but primarily it’s William Goldman, who managed to write a film where we all know what’s gonna happen, and yet we’re compelled to watch this process. Imagine if, in Psycho, the title sequence was Perkins putting on his wig and robe, so we all know it’s him — that’s the problem Goldman had to deal with. We all knew it was Nixon. And yet he managed to pull it off. Blew me away, that film. The performances, and the writing… who was that actor who played the editor? Jason Robards. He tells them to go after it. I wish the press would behave like that today, you know: “Go after these f–kwits, and nail them.”" 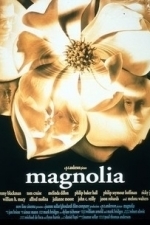 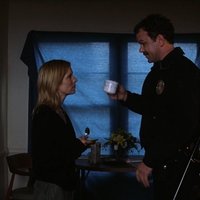 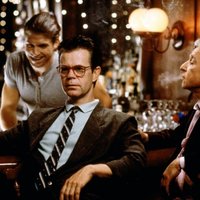 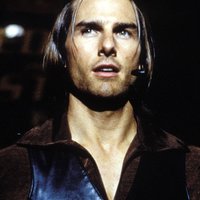 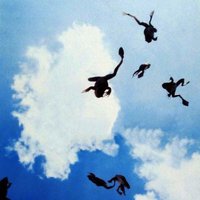 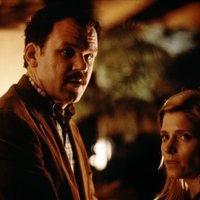 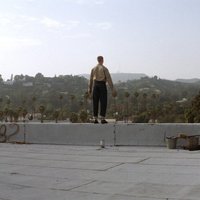 "We’re back to opera, we haven’t left it — because Magnolia. If you think about the moment Keanu wakes up as a battery, the moment Lana Turner loses it in traffic and is in this insane hysteria of flashing lights that is completely unrealistic, and then you look at the moment where it’s raining frogs. I saw it, and was like, “Is this going to be one of those movies that I don’t like where he looks down on every one?” I think Alexander Payne and Todd Solondz are super talented, but sometimes I don’t want to sit through their movies because the bile is just unbearable. I didn’t really know PT Anderson’s work that well, or what was going to happen. And then, it turns out he loves people so hard that it rains frogs. There is actual opera in this one. Oh, and BT-dubs, there is a musical number. The license and the observation and the amount that he went for it. The craft and his ability to sustain that much — any one of these movies could have fallen into a puddle of pretension, but the mastery behind them meant that they never could. Jason Robards, who happens to be in two of the movies on this list, him actually dying of actual cancer playing a guy dying of cancer, giving that speech. And Tom Cruise giving the best performance he’ll ever give. It just felt so achingly, weirdly logical to me." 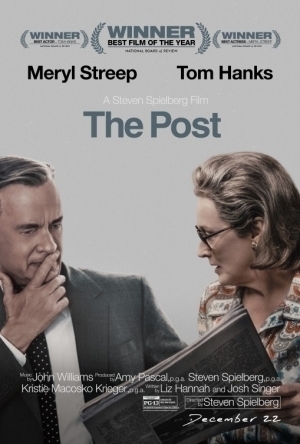 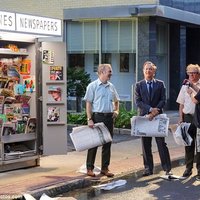 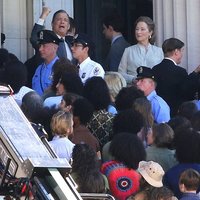 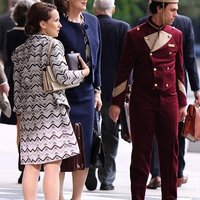 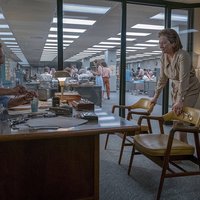 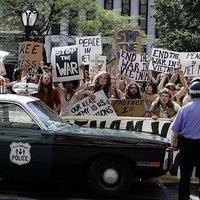 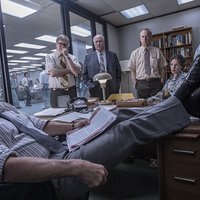 Landing the Hindenburg in a Thunderstorm.
What a combination: Streep, Hanks, Spielberg, Kaminski behind the camera, Williams behind the notes. What could possibly go wrong?
Nothing as it turns out. After, for me, the disappointment of “The BFG” here is Spielberg on firm ground and at the height of his game.
It’s 1971 and the New York Times is in trouble for publishing what became known as “The Pentagon Papers”: a damning account of multiple administration’s dodgy dealings around the Vietnam War, put together by Robert McNamara (Bruce Greenwood, “Star Trek: Into Darkness“) and meant for “posterity” – not for publication! Watching from the sidelines with frustration at their competitor’s scoop are the Washington Post’s editor Ben Bradlee (Tom Hanks, “Bridge of Spies“, “Inferno“) and the new owner Kay Graham (Meryl Streep, “Florence Foster Jenkins“, “Suffragette“). With immaculate timing, Graham is taking the paper public, so needs the newspaper embroiled in any sort of scandal like a hole in the head. But with the US First Amendment under pressure, will Graham and Bradlee put their business and their freedom at risk by publishing and being damned?

Bradlee (Tom Hanks) and Graham (Meryl Streep) in the Washington Post’s newsroom.
Both of the leads play characters that are quite strikingly out of character from their normal roles.
In a seamingly endless run of ‘kick-ass’ women in the movie driving seat, here I expected Streep to be in full “Iron Lady” mode, but in fact she starts the film as quite the opposite: nervous, timid, vascillating. For although the story is about “The Washington Post” and “The Pentagon Papers”, the real story is about Graham herself (Liz Hannah’s script is actually based on Graham’s autobiography). In many ways it’s about a woman, in a male world, overcoming her fear and finding her own voice. As has been demonstrated in many recent films (“Hidden Figures” for example) the working world for woman has changed so markedly since the 60’s and 70’s that it’s almost impossible to relate to these chavenistic attitudes. Graham is repeatedly downtrodden as “not good enough” by her underlings within earshot, and then thanks them “for their frankness”. When the women folk retire at dinner, to let the men-folk talk politics, Graham meekly goes with them. Even her father, for God’s sake, left the newspaper not to her but to her (now late) husband! It’s no surprise then that she is coming from a pretty low base of self-confidence, and her journey in the film – as expertly played by Streep – is an extraordinarily rousing one.

The real deal: Ben Bradlee and Kay Graham.
Hanks, normally the guy you’d most like to invite round for dinner (@tomhanks if you happen to be reading this sir, that’s a genuine invitation… we make a mean lasagne here!) also plays somewhat outside of his normal character here. As Bradlee, he is snappy, brusque and businesslike. Although I don’t think he could ever quite match the irascibility of the character’s portrayal by Jason Robards in the classic “All the President’s Men” – who could? – its a character with real screen presence.

The similarities with Alan J Pakula’s 1976 classic Watergate movie – one of my personal favourites – don’t stop there. The same sets that were once populated by Redford and Hoffman are gloriously reproduced with Spielberg and Janusz Kaminski delivering great tracking shots through the newsroom. (Watch out for Sacha Spielberg – daughter of Stephen and Kate Capshaw – who also turns up there delivering a package).

The scoop revealed: Odenkirk, Hanks and David Cross get the low-down.
The supporting cast includes Sarah Paulson (so memorable in “The Trial of O.J. Simpson”) as Bradlee’s wife Tony, Bradley Whitford (“The West Wing”, “Get Out“) and Tracy Letts (“The Big Short“) as two of Graham’s board advisors and Jesse Plemons (“The Program“, “Bridge of Spies“) as the lead legal advisor. Particularly impressive though is Bob Odenkirk (“Breaking Bad”) as Ben Bagdikian, Bradlee’s lead investigative reporter on the case: all stress, loose change and paranoia in his dealings with the leaky Daniel Ellsberg (Matthew Rhys).

Bagdikian (Bob Odenkirk) ordering a drink for himself and his travelling companion.
In a memorable piece of casting Richard Nixon is played by…. Richard Nixon. Although a silluohetted Curzon Dobell stalks the Oval office, the ex-president’s original phone recordings are played on the soundtrack. (There, I knew those recordings would be useful for something… thank heavens he kept them all!)

The film also demonstrates in fascinating style the newsprint business of yesteryear. When I click a button on my PC and a beautifully laser-printed page streams out of my Epson printer, it still seems like witchcraft to me! But it is extraordinary to think that newspapers in those days were put together by typesetters manually building up the pages from embossed metal letters laboriously slotted into a frame. Brilliantly evocative.

Ellsberg (Matthew Rhys) takes a risk.
If Spielberg has a fault, it is one of sentimentality – something that is pointed out in Susan Lacy’s superb HBO documentary on Spielberg (something I have yet to write a review on, but if you like Spielberg you should definitely seek out). Here he falls into that trap again, with an unnecessary bedroom scene between Graham and her daughter tipping the screenplay into mawkishness. It’s unnecessary since we don’t need the points raised rammed down our throats again. It’s something repeated in a rather bizarre final scene with Graham walking down the steps of the supreme court with admiring woman – only woman – watching her. These irritations tarnish for me what could have been a top-rated film.

But the movie is an impressive watch and older viewers, and anyone interested in American political history will, I think, love it. The film, especially with its nice epilogue, did make me immediately want to come home and put “All the President’s Men” on again… which is never a bad thing. Highly recommended.