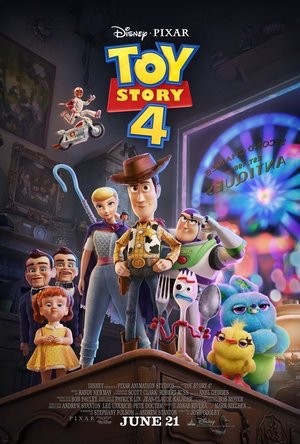 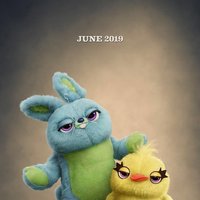 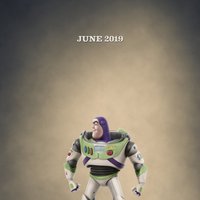 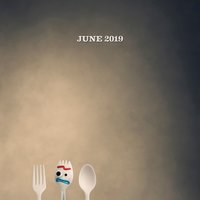 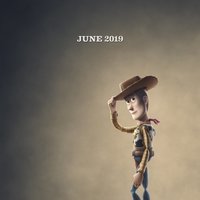 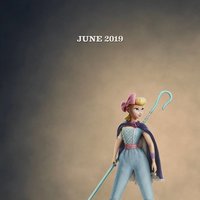 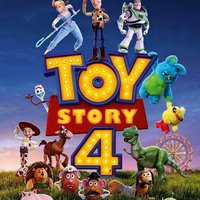 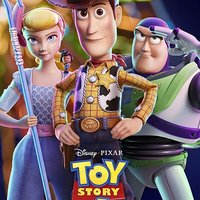 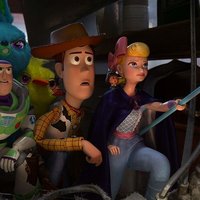 Pixar animation on point. (3 more)
All the familiar... voices?
Great story, as always(suck it Illumination)
You WILL cry
Expected... unexpected jump scare is expected. (1 more)
You WILL cry
The Necessary Unnecessary Sequel
Contains spoilers, click to show
Here is Toy Story 4. When you thought it was all over with Toy Story 3, how in the hell did we need this one. Well... lemme tell you... we did.

Quick recap, what happened at the end of Toy Story 3? Andy went off to college, and gave ALL of his toys to a little girl named Bonnie. That was it.

So why was this story necessary? Without telling you EXACTLY how the movie goes...... what happens with toys when they go to a new owner? How about the idea of toys that are unwanted? And what about defective toys? Or those that are sitting on the shelf of an antique shop?

It also tackles the mystery of what happened to Bo Peep. Great to tie up that one loose end.

And then we come to Forkie. The "toy" that Bonnie made her first day of kindergarten. It's a spork. With pipe cleaner, popsicle stick, and googly eyes. In a parallel from the first movie, Buzz thought he was the REAL Buzz, and Woody has to help him realize he is a toy...... well... Forkie thinks he is trash... and Woody has to explain to him that he is a toy. Weird, but satisfying. And dammit... Trash!!!!

Watching this movie, made me miss Jim Varney. If you don't know who that is, lemme find an Ernest DVD box for ya, and I slap you with it. Also. Rest In Potatohead Parts, Don Rickles.

Last note... Toy Story 4 is another example of amazing animation AND story. Illumination Studios can't grasp that yet. 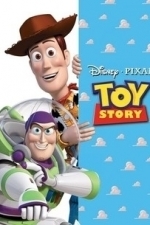 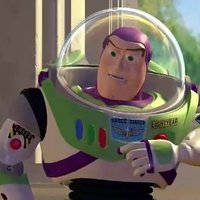 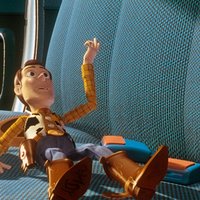 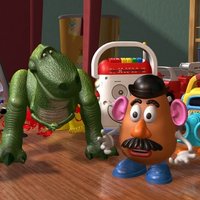 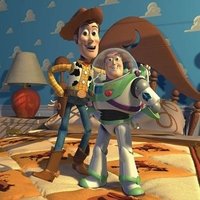 Truly a classic
With Toy Story 4 coming out in theaters this summer, I thought I'd go back and check out a beloved classice - the original TOY STORY (1995) to see if this film holds up to my memory of it.

Directed by visionary Pixar founder John Lasseter, TOY STORY is the first computer generated full-length motion picture and tells the...story...of toys that come to life when the humans leave the room. It is a simple concept that is executed beautifully with wit, charm and heart that sustains to this day and (I would imagine) to infinity...and beyond.

Besides the revolutionary CGI work (which mostly holds up), the heartwarming story and the crispness of the pacing of the film, the masterstroke here is the pitch perfect voice casting. Tom Hanks was the first - and only - choice for Woody, the Cowboy doll that has been the main toy for Andy. His confidence is shattered when Andy receives a Buzz Lightyear action figure for his birthday and he struggles to maintain control of the room - and Andy's heart. In lesser hands, this character could be be annoying and a bit of a jerk, but with Hanks' inherent charm, Woody is lovable, neurotic and vulnerable as he tries to get out of one jam after another.

Tim Allen wasn't the first choice for the voice of Buzz Lightyear, but with his success in 1994's THE SANTA CLAUS he was called into service on this film - and the results couldn't be better. He blends machismo, bluster and a sincere earnestness that perfectly pairs and counterbalances Hanks' tics to form a movie duo that ranks right up there with the best in film history.

It is the attention to detail that these filmmakers really excel at and the supporting cast of voice actors really brings it here. From Don Rickles to John Ratzenberger to Annie Potts to R. Lee Emery to Jim Varney to Laurie Metcalf, all bring charm and heart to their characters even when they are in conflict.

Speaking of attention to detail, the CGI in this film works really, really well - even after 23 years of improvements. The filmmakers were blazing a trail and there is much to look at in the background, from the 2 "Hidden Mickey's" in Andy's room to the tribute to THE SHINING, the background and renderings are lush and are worth a viewing just to look at hidden gems (and Easter Eggs) in the background.

But none of this would matter if the story wasn't any good and I give story writers Lasseter and future Pixar Director's Pete Docter and Andrew Stanton credit for keeping the story crisp, clear and simple and infusing heart and sincerity without getting cloying or annoying. Interestingly enough, in looking at the credits, Joss Whedon, Joel Cohen and Alec Sokolow were all contributors to the screenplay as well. When I see that many writers on a screenplay, I worry about continuity and flow. But, make no mistake about it, this film has a strong vision driven by Lasseter and the results on the screen show that focus.

If you haven't seen this film in awhile, give yourself a treat and check it out again, it holds up very, very well and will be well worth the 84 minutes it will take to watch it (the shortest of all PIXAR films).

A masterpiece
Film #9 on the 100 Movies Bucket List: Toy Story

When Toy Story was first released in 1995, it was groundbreaking. The first ever fully computer animated film and the first released by Disney Pixar, this was also one of the first films I saw at the cinema as an 8 year old child. Admittedly at that age I was concentrating more on the colourful animated toys rather than appreciating the sheer wizardry on offer, but from repeated watches over the decades, I’ve come to fully recognise the sheer genius of this film.

Toy Story centres around the idea that toys are alive, a concept that most children would love to be true. It follows Woody, a cowboy voiced by Tom Hanks, who’s cushy existence as the top dog of Andy’s toys is disrupted by a new space ranger doll, Buzz Lightyear, voiced by Tim Allen. As Buzz soon becomes Andy’s favourite toy, Woody’s jealousy drives him to desperate measures that wind up with the pair of them becoming ‘lost toys’ and captives of evil neighbour Sid. And together with Buzz and Woody are a whole host of colourful and wacky toy characters, including Mr Potato Head (Don Rickles), Slinky Dog (Jim Varney), Etch-a Sketch and a bucketful of toy soldiers to name but a few of the childhood throwbacks on offer here.

Watching this back 25 years later, it’s hard to believe this film was released in the mid-90s. Whilst you can tell that more recent Disney Pixar releases have improved massively on the animation since Toy Story, the standard of the animation in this is hugely impressive. There are some studios that can’t master this level of detailed animation even now as we move into 2021. The feature and intricacies on show here is impressive, especially with the toy characters - you need to look no further than the scales on Rex (voiced memorably by Wallace Michael Shawn) as a shining example of this.

It isn’t just the animation that that makes Toy Story so brilliant though, it’s the entire package. It’s a heartwarming and often hilarious buddy story of sorts, with some strangely adult messages hidden in the childlike story (Buzz’s disillusionment at being a toy rather than a real space ranger is particularly poignant). As a child this made me believe my toys were alive, and as an adult I’m still hesitant about donating or throwing away old cuddly toys. It’s also full of what we’ve all come to know and love about Disney Pixar: a film suitable for kids but full of grown up innuendos and adult jokes that makes it appropriate for all ages. Alongside this it has a fantastic voice cast in household names Tom Hanks and Tim Allen, and of course brought us the first of many characters voiced by the unforgettable John Ratzenberger. And what further rounds this off is the catchy and touching original songs by Randy Newman. I doubt there are many people who haven’t heard “You’ve Got a Friend in Me”, a song that evokes such a warm and fuzzy feeling inside and is fully deserving of the ‘Best Original Song’ Oscar nomination.

Toy Story is undoubtedly a masterpiece in animation. Whilst it may not have aged incredibly well when comparing it with more recent releases, this is the film that first introduced us to the world of Disney Pixar and paved the way for all of those that have followed. 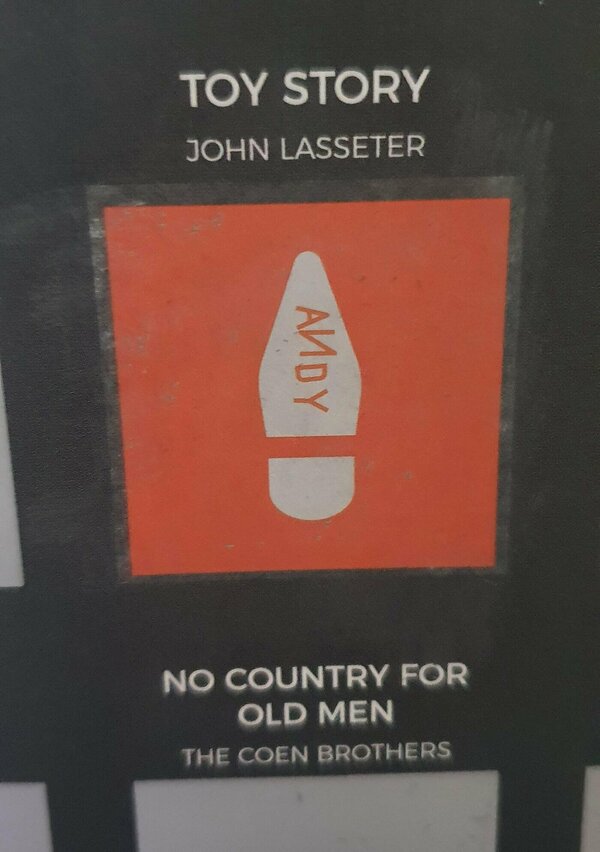