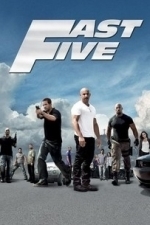 (15 Ratings)
Movie Rating Watch
The 2011 summer movie season kicks off in high gear with the release of Fast Five the latest installment in the phenomenally popular Fast and Furious series. The movie picks up exactly where the previous film ended with Brian O’ Conner (Paul Walker), orchestrating a daring escape for Dominic Toretto (Vin Diesel).

The film quickly moves forward in time where Brian and Dominic’s sister Mia (Jordana Brewster), overall fugitives from the law, have taken refuge in Rio. Unsure of exactly where Dominic is, an old family friend offers Brian and Mia roles in a job which will surely score them some very easy and much-needed money. Although reluctant, Brian agrees to the job which involves the theft of three high-value cars from a train. Things go horribly wrong when they’re doublecrossed, the aftermath of which leads to the death of three federal agents. Only Dominic’s arrival, quick thinking, and a daring escape allows Brian and Mia to survive.

Although it is not their fault, the deaths of the agents is blamed solely on the trio, and an elite fugitive hunter named Hobbs (Dwayne Johnson) arrives with his team with the sole mission of stopping Brian, Mia and Dominic, no matter the cost.

As if this wasn’t enough trouble for the fugities, it is learned that they have also fallen on the radar of the local drug kingpin named Reyes (Joaquim de Almeida), who will stop at nothing to retrieve an item now in the trio’s possession. Caught in the crossfire between Hobbs and Reyes, Dominic plots an epic caper that will allow them not only the money to flee Hobbs and disappear into a life of luxury, but allow them to settle the score with Reyes.

What follows is a nonstop action thrill ride that sprinkles in a nice mix of comedy and romance to keep things interesting. The film downplays the racing aspect of the series and instead saves the spectacular driving for key action sequences. While street racing scenes are alluded to they are not shown as director Justin Chin focuses squarely on his cast and allows them ample time to develop their characters. In doing so it strengthens the bond between them and allows the climactic sequence to have an even greater impact than your standard over-the-top summer film action scenes.
.
There are some really funny moments in the film as Dominic assembles his team to pull off the ultimate job. The new characters work very well with the established cast from the previous films and introduce characters which I hope will be a part of any future films in the series. Johnson was a very pleasant surprise, as his character could easily have been one-dimensional. He was given a few wrinkles which allowed him to walk the fine line between good guy and bad guy, which is an essential quality to many of the film’s characters. Johnson’s action sequences were solid and highly effective and once again underscores that he needs to be focusing more on action films and less on the family-friendly genre that
has dominated the bulk of his recent work.

Walker and Diesel complement each other perfectly and appear to be having a great time working with one another again. They have a very easy-going and natural chemistry with one another that works even when they’re not behind the wheel of a car or caught up in a frantic action scene.

While the plot of the film is fairly straightforward it provides ample framework for the characters to grow and propel the story forward. While the audience is asked to take some great leaps in logic it doesn’t derail from the finished product. The stuntwork in the film was absolutely amazing and the spectacular finale of the movie alone must be seen to be believed.

Many times during my press screening the audience was completely silent for a brief second following an action sequence before erupting into thunderous applause and cheers after they’ve fully processed what just unfolded on the screen. Larger-than-life characters combined with larger-than-life action, plus some very sexy cars and very sexy people make an extremely winning formula. If the rumors are true, Chin may be handed the reins to the Terminator franchise as well as the next film in the Fast and Furious series, then audiences are in for one hell of a ride.

I think my wife summed it up best when she said that movie was “Ridiculous…ridiculously good.” Reality is thrown out the window for pure adrenaline and testosterone fueled action.