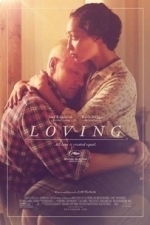 (3 Ratings)
Movie Rating
Hidden Vigour: Negga excels in another glimpse into America’s racist past.
A few weeks ago when I reviewed “Hidden Figures” I pointed out the how absurd the racist behaviour at NASA in the 60’s must have appeared to a young boy in the audience at my screening. In many ways, “Loving” – a film that has had a lot less publicity and is a less obvious ‘crowd-pleaser’ – makes a useful companion piece to that film.

It tells the true story (yes, yet ANOTHER ‘true story’!) of Richard and Mildred Loving who travelled from their home town of Central Point Virginia to Washington DC where – as a mixed race couple – they could legally get married.

However, on returning to their home state and living together as man and wife, they fell foul of the State’s repulsive antimiscegenation statute which banned inter-racial marriages. The Lovings were found guilty and sentenced to a year in jail, which was suspended on the requirement that – unbelievable but true – the couple leave Virginia and not return (together) for 25 years. The film documents the fight of the couple – largely led by the feisty Mildred (Ruth Negga) – to fight the injustice, taking the case ultimately to the US Supreme Court for an historic ruling.

This was an Oscar-nominated performance by Ruth Negga and, man, is it deserved. It’s a performance of such quiet understated power that it is a joy to watch. But also strong is that of Joel Edgerton (“Midnight Special“, “The Great Gatsby“) as Richard who here adopts a largely sulky and subservient manner that contrasts beautifully with Negga’s perky optimism.

I also loved the performance of Marton Csokas (Celeborn from “The Lord of the Rings”), chillingly unreasonable as the bigoted Sheriff Brooks and Michael Shannon (“Nocturnal Animals“, “Midnight Special“) as the Time photographer Grey Villet, capturing a classic picture that is shown (in standard ‘true story’ fashion) at the end of the film (and below).

Written and directed by Jeff Nichols, whose “Midnight Special” last year made my top 10 of the year, this is a thoughtful and educational piece that should particularly appeal to older viewers keen to see a drama of historical importance beautifully told.