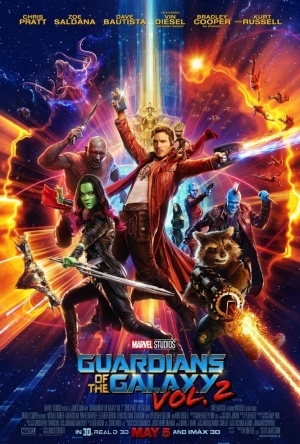 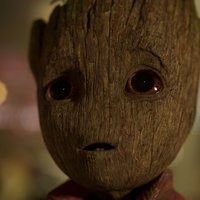 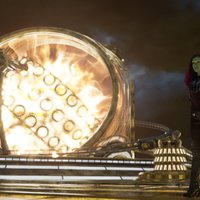 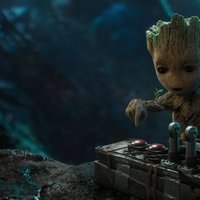 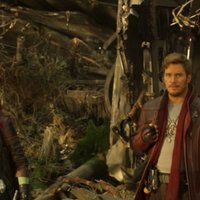 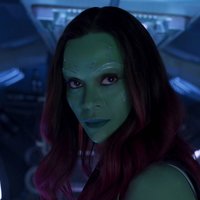 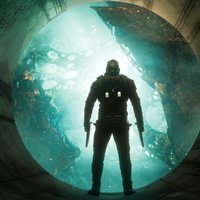 Does what a good sequel needs to do
I have to admit that I really liked, but did not LOVE the first Guardians of the Galaxy film, so when I entered the local cineplex to check out Volume 2, I had lowered my expectations, figuring I'd find a film that was filled with "sequel-itis" and be just a step down from the previous film.

I LOVED GUARDIANS OF THE GALAXY, VOLUME 2. This sequel succeeded in doing what a good sequel needs to do - take the premise, feel, characters and style of the first film and build on it.

Starting with the "core 5" - StarLord (Chris Pratt), Gamora (Zoe Saldona), Drax (Dave Bautista), Rocket Racoon (voiced by Bradley Cooper) and Baby Groot (voiced by Vin Diesel). These are all welcome characters that grow from the first movie to the 2nd, each with a purpose in this film and with something important to do. I enjoyed seeing them all again. Special notice should be paid to Bautista, who's Drax left me somewhat cold in the first film. Here he is a delight. Add to this returning characters Yondu (Michael Rooker) and Nebula (Karen Gillan) as well as newcomers Mantis (Pom Klementieff), Ayesha (Elizabeth Debicki) and Ego (Kurt Russell) and you have an ensemble that is easy and fun to watch.

At some point in the film, I thought to myself "now, THIS is a comic book film!" and I think it is because of the action and the visuals. The action moves fast and furious all the while populating a Universe (literally) that is eye-popping and interesting to watch. Director Gunn keeps things moving along, never staying too long in one place whilst avoiding the shaky-cam action. I always knew where I was in an action scene, what the characters are working on or for and what the outcomes might be. It is a refreshing change from the disorienting "shaky-cam" that the Bourne movies have wrought.

And, of course, nothing can top the soundtrack. The first film's "Awesome Mix" was a strong, joyous part of that movie. "Awesome Mix, Vol. 2" picks right up where the first one left off. The songs picked for this film did not disappoint.

Nor did much of this film. I enjoyed myself - and the antics of this gang - from start to finish, including the 5(!) extra scenes in the credits.

Saving the Universe is bound to get you noticed, and in “Guardians of the Galaxy Vol. 2”, we find the dysfunctional Guardians reaping the benefits of their newly found notoriety by being hired to resolve threats all over the galaxy.

During a frantic and hysterical battle the crew is eventually triumphant and accepts their payment, which is the form of Nebula (Karen Gillan), who the crew look to turn in for a very lucrative bounty and settle some old scores in the process.

Of course their naturally ability to find trouble arises thanks to Rocket, and soon they have a very large and motivated new enemy gunning for them which results in them crashing on a remote planet. A mysterious benefactor named Ego (Kurt Russell), arrives and claims to have a connection with Peter and he, Gamora, and Drax head off with Ego and his assistant Mantis (Pom Klementieff), to his planet while the rest of the crew repair the ship.

As if things were not complicated enough, Yondu (Michael Rooker) and his crew of Revengers arrive hoping to collect a Bounty on the Guardians that has the group divided and facing serious danger.

A new and greater threat is soon discovered and despite internal tensions and conflicts, the Guardians must once again risk everything to save the universe once again.

The new film hits the ground running with plenty of action and humor and gives the characters new and old plenty of great moments that really expand upon their characters. The only issue is that the film does have some slow pacing in the middle as we are given numerous CGI landscapes where the crew walks around talking, but little else. With such a large cast, this is done to allow the characters to grow and new ones to be properly introduced, but it can at times drag on. Thankfully the finale is filled with the trademark humor and action that fans have come to expect which although very CGI heavy does result in a very satisfying and surprisingly touching finale.

The cast works well with one another and the jokes fly frequently throughout. Writer/Director James Gunn has done a great job in expanding the characters and introducing new ones as we see new layers of complexity to the characters that explain their actions and motivations in ways not usually shown in comic themed movies.

I would strongly suggest waiting through the credits for the numerous bonus scenes and keep an eye out during the film for some special surprises as the film is littered with them.

As the characters will soon transition to “The Avengers: Infinity War” which is currently filming audiences will not have to wait as long to see the dysfunctional Guardians family on their next outing, and thankfully we have an enjoyable new outing to enjoy until then.

We have a problem
To say 2014’s Guardians of the Galaxy was a surprise hit is a slight understatement. Many had predicted Marvel’s gamble to sink the studio with its unknown characters and very unique sense of style, but it ended up being one of the year’s best films grossing nearly $800million.

Three years on, director James Gunn returns with the plucky group of space stars. But can lightning strike twice? Or have the Guardians had their time to shine?

To our cast of space vigilantes, James Gunn has thrown in a few new personas and fleshed out some secondary characters, resulting in a film that rivals Avengers: Age of Ultron for the amount of people jostling for screen-time. Unfortunately, Volume 2 also suffers from many of the same problems as its earthly stablemate.

The biggest joy of watching Guardians 2 is seeing those secondary characters getting their chance in the spotlight. In particular, Michael Rooker’s Yondu makes a massive impact throughout the running time and is a highlight throughout. Elsewhere, Karen Gillan’s villainous Nebula gets a similar treatment, though not quite to the same extent.

Moreover, the team we have all come to know and love is on fine form, even if they are split from one another for the majority of the film. Chris Pratt is probably the biggest star in Hollywood at the moment and he looks like he’s having the time of his life. However, it’s not Star Lord that shines brightest this time around. That honour goes to Dave Bautista’s Drax.

The addition of Kurt Russell as Pratt’s father, Ego is an ingenious piece of casting and his ‘pet’ Mantis, played wonderfully by Pom Klementieff steals the show in every scene. Her brief moments with Bautista are where the film really succeeds.

Another witty script crafted by James Gunn and Nicole Perlman ensures that Guardians 2 is absolutely hilarious. Some of the one-liners are absolute corkers and it often outdoes its predecessor, raising the bar very high for future Marvel projects in the process.

To look at, Volume 2 is pleasant if unspectacular. Colourful? Yes. Detailed? Not so much. With so much going on at once, it’s easy for the film to feel overwhelmed with some of the CGI being downright poor. The opening scene in which our heroes battle a hideous octopus-like beast, whilst fun to watch, isn’t crafted to the same level as its predecessor’s introductory sequence. The finale is a little anti-climactic, unfortunately falling into the same pitfalls that so many big blockbusters do nowadays – needless and frankly ugly CGI.

Guardians of the Galaxy: Vol 2 is another accomplished film in the ever-expanding Marvel Cinematic Universe. However, like Avengers: Age of Ultron, it suffers from its predecessor’s popularity and is overstuffed with too many characters elbowing for screen-time.

Unfortunately, the new approach the first film took has disappeared a little this time around. Because Volume 1 was such a delightful change from the rest of the crowd-pleasing blockbusters, Guardians 2 was bound to be a bit of a disappointment.

The team Kurt Russell as Ego Michael Rooker as Yondu Yondu's arc Rocket and Yondu team up Cgi young kurt russell (0 more)
Jokes don't land as well as the first film The balance between heart and humour isn't as strong (0 more)
"He may have been your father boy but he wasn't your daddy"
The follow-up chapter to Guardians of the Galaxy and fifteenth instalment in the Marvel Cinematic Universe, Guardians of the Galaxy Vol. 2 is bigger in both scale & scope and continues the journey of this oddball gang of extra-terrestrial misfits while also bringing more figures from their past into the spotlight and although its vibrant use of colour palette & another tightly curated soundtrack are notable highlights, the film as a whole lacks the freshness of the original.

The story of Guardians of the Galaxy Vol. 2 finds Peter Quill, Gamora, Drax, Rocket & Baby Groot embracing their new roles of the Guardians as they are hired by a galactic race to save a valuable item from an inter-dimensional beast, a mission they successfully accomplish, but when Rocket steals some of the very items they just fought to protect, they're attacked by a fleet of drones and crash-land on a planet where they meet a mysterious figure who may have answers to Quill's true origin.

Written & directed by James Gunn, the film opens with a flashback but it is the main title sequence where it gets into the groove and wholeheartedly evokes the pleasant delights of the original. And while there are more flashes of it down the line, Gunn's writing & direction falls short of achieving the same feat twice, for not all attempts at humour hit the right spot this time and one can easily tell that the director is trying a tad too hard to match the consistent vibe & free-flowing wit of its predecessor.

The set pieces are more extravagant than last time and they are beautifully designed & gorgeously rendered on the screen. Cinematography makes vivid use of all existing colours and the resulting frames flourish with radiant hues from start to finish. Pacing isn't a big issue but Editing does lack the smoothness of its predecessor. Every moment in the movie relies heavily on visual effects and the VFX team leaves no stone unturned to make sure there is nothing to complain about, whether it's the celestial bodies or CGI characters or any set piece.

Coming to the performances, Guardians of the Galaxies Vol. 2 features Chris Pratt, Zoe Saldana, Dave Bautista, Bradley Cooper, Vin Diesel, Michael Rooker & Karen Gillan in their reprising roles while new additions include Kurt Russell & Pom Klementieff. But of all the big names, it's Rooker who impresses the most and his character of Yondu easily stands out as a show-stealer. One of the best things about the first film was its eclectic soundtrack and this sequel delivers in that field yet again with another awesome mix that seamlessly blends into the narrative.

On an overall scale, Guardians of the Galaxy Vol. 2 may not be a better film than its predecessor but it is still a worthy sequel that offers its own set of thrills & amusement, and happens to be just as much fun & entertaining an experience, if not more. It certainly earns its spot in the Marvel Cinematic Universe and its colourful images, dazzling visuals & first-rate soundtrack, in addition to its witty plot, idiosyncratic characters & wonderful performances, puts it right up there with Marvel Studios' better sequels. Enjoyable, entertaining & a whole lot of fun, Guardians of the Galaxy Vol. 2 is definitely a solid summer blockbuster extravaganza.
Kudos