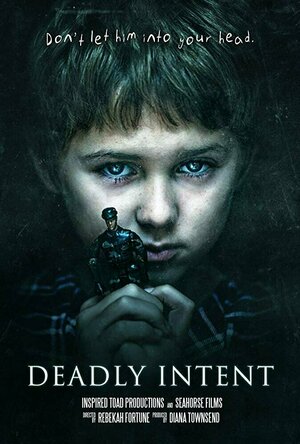 I am on a pretty big Indie kick right now. Trying to rekindle my love of the the Movie Gems you can find out there if you just look past the top 10 of the moment. In doing this we have created a Spin-Off of our podcast in which we will endeavor to promote Indie Cinema and Indie releases on such forms as VOD because not everything has to be capes and spandex or break a billion at the box office.

Deadly Intent is a movie I would stick in the above category. A low budget Few thrills Intense Psychological Horror/Thriller that ticks all the boxes it promises to. Think Babadook, a tense movie that runs at its own pace and is driven by the performances of its leading Female (Rebecca Reaney) as a mother who’s thread is slowly being unwoven and James (Gus Barry) a child who is struggling to deal with the loss of his father… But wait something is afoot.
download-40

I will only dive into this movie a little because to be honest it is only a roughly 90 minute flick that takes half the time your normal thriller would take to actually get into things and keeps the momentum going till the credits. Rebecca Reaney plays Bryony, a mother who is really trying to keep it together for her son James after the death of his father. As with every child in a movie of this genre, James begins to have some paranormal interaction with his father. Not in a Field of Dreams “Do you wanna play catch” type of way, more of a “If im heading to the light your coming with me”. As things really begin to turn to shit for our mother and son we are also given a backstory of the lead up to the fathers supposed death in the form of flashbacks, we find him to be a former soldier suffering from PTSD and… Well not a very nice man.

This movie held my attention in a way I was not really expecting, you hear British, Horror, Thriller and it doesn’t immediately fill you with hope. However we have been able to make some corkers at times and like I say i’m on an Indie kick so this fell into my wheelhouse. The movie is very well executed by not only its reasonably small cast of characters but also script wise and directorial wise. It really doesn’t out stay its welcome, and you can really draw comparisons with movies like Babadook which is a cult darling so thats never a bad thing.

I recommend you give this flick a watch if only for the performances given by Rebecca Reaney and the rest of the cast. As for the movies director Rebekah Fortune, I fully expect to be seeing more from this woman in the future.