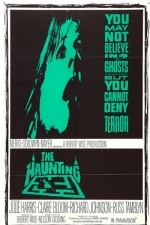 (6 Ratings)
Movie Rating Watch
The Haunted House
The Haunting- is one of the best horror movies of all time. Its scary, spooky, haunting, terrorfying, horrorfying and more.

The Plot: Dr. John Markway, an anthropologist with an interest in psychic phenomena, takes two specially selected women to Hill House, a reportedly haunted mansion. Eleanor (Julie Harris), a lonely, eccentric woman with a supernatural event in her past, and the bold Theodora (Claire Bloom), who has ESP, join John and the mansion's heir, cynical Luke (Russ Tamblyn). They are immediately overwhelmed by strange sounds and events, and Eleanor comes to believe the house is alive and speaking directly to her.

From the great novel- The Haunting of Hill House by Shirley Jackson.

The film was remade in 1999 by director Jan de Bont, starring Liam Neeson, Lili Taylor, Catherine Zeta-Jones and Owen Wilson, but that version was heavily panned by critics and audiences. Dont watch that film, but instead watch this masterpiece.

I would highly reccordmend this movie.