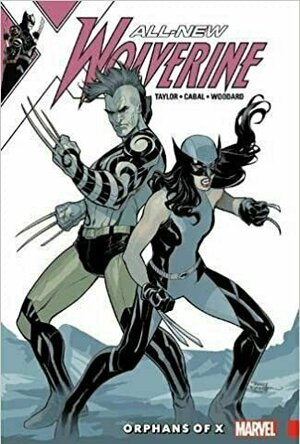 (2 Ratings)
Book Rating
<b>**</b> <i>Before I begin, I should just like to preface this review with the following disclaimer: any reviews I have written are almost always going to be less than biased, due to the content being related to Laura Kinney (X-23). However, that being said, if the story is rubbish, and Laura is in it, I will still be honest in my review. Now, on to the review.. </i><b>**</b>

ORPHANS OF X was the perfect story arc to wash away the taste from the two previous arcs - "Enemy of the State II" and "Immune". From the beginning to the end, this was a solid story! There was action, there was suspenseful tension, and, of course, there was humor along the way (Thanks in part to Gabby, or as she is known by her new codename: Honey Badger!). A winning recipe for how to write a comic book successfully!

Under writer Tom Taylor's hand, Laura has evolved as a character. Yes, she was a former assassin. Yes, she killed a hell of a lot of people during her time when she was part of the Facility's Weapon X Program. However, that doesn't mean you can't a) move beyond that, nor b) can you just forget that. And that is what Taylor has done.

Laura has grown, taking on the responsibility of looking out for/"raising" her sister/clone Gabby. She displays more emotions, not 100% perfect, but considering her backstory, it makes sense the way she is being written.

No spoilers, promise, but the ending resolution to ORPHANS OF X sets in motion great potential! We know the next arc will be "Old Woman Laura", but after that? Oh, wait 'til you read it, and if you are a fan of the character, you should be as excite as I am!

And, as praiseworthy as Tom Taylor's writing was, I feel I should also gave a more than fair nod to new series artist (I hope!) Juann Cabal. A lot of talent, and definitely someone this book could use! Cabal's pencils are tight, yet fluid. He brings a lot of action to a fight panel, yet also brings a careful attention to facial detail when it is a simpler, not action-y scene.

Oh, of course, there were also some amazing (as always) covers by fan favorite Terry Dodson! Brilliant!!

Many of us, fans of Laura Kinney, have been hankering for a story like this. Everything about it was all aces! But, don't let me be the final word on this. By all means, good folk, read on..