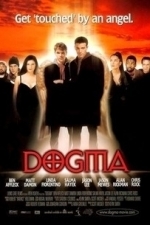 Two fallen angels who were ejected from paradise find themselves banned in Wisconsin. They are now... 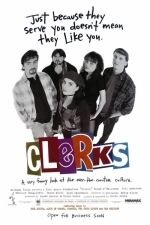 Simple (3 more)
Hilarious
Pop Culture discussions
Jay and Silent Bob
I'm not even suppose to be here today!
Here is a film that could have left Kevin Smith in the Quickstop paying off the money he used to make this film, which he accomplished by maxing out credit cards.

Kevin Smith is an inspiration and this film is the start of it all. Clerks is a very simple film that manages to be entertaining and hilarious. The concept is this; Dante Hicks (Brian O'Halloran) is asked to work on his day off, and ends up spending his day working in his dead end job behind the counter at a convenience store in New Jersey.

I should mention that this film is shot on a Arriflex 16 SR2 which means the film is in black and white.

Working with Dante is his best friend, Randal Graves, who isn't exactly a big help around the store or with personal problems. If anything, he makes matters worse because he almost never takes anything seriously.

The humour in this film is found through discussions of films such as Star Wars, discussions about sex, and about the customers of course. Describing it in text doesn't do it justice so you'll just have to watch it if I have in anyway peaked your interest.

This film was the introduction to what is known as the 'View Askewniverse' which is a series of films by Kevin Smith which are all connected via characters and events. However, the most important introductions from this film are the characters of the now famous duo, Jay and Silent Bob played by Jason Mewes and Kevin Smith. Yes, the same Kevin Smith who wrote and Directed the Movie. These two are the only two characters to appear in every movie in the View Askewniverse and usually help move the film in the right direction.

Overall, Clerks has to be one of my favourite movies of all time and once you watch the Askewniverse, it's easy to understand why, because no only is it smart and hilarious, but you have to appreciate that this started a series of other great indie films that made Kevin Smith the funny man he is today.